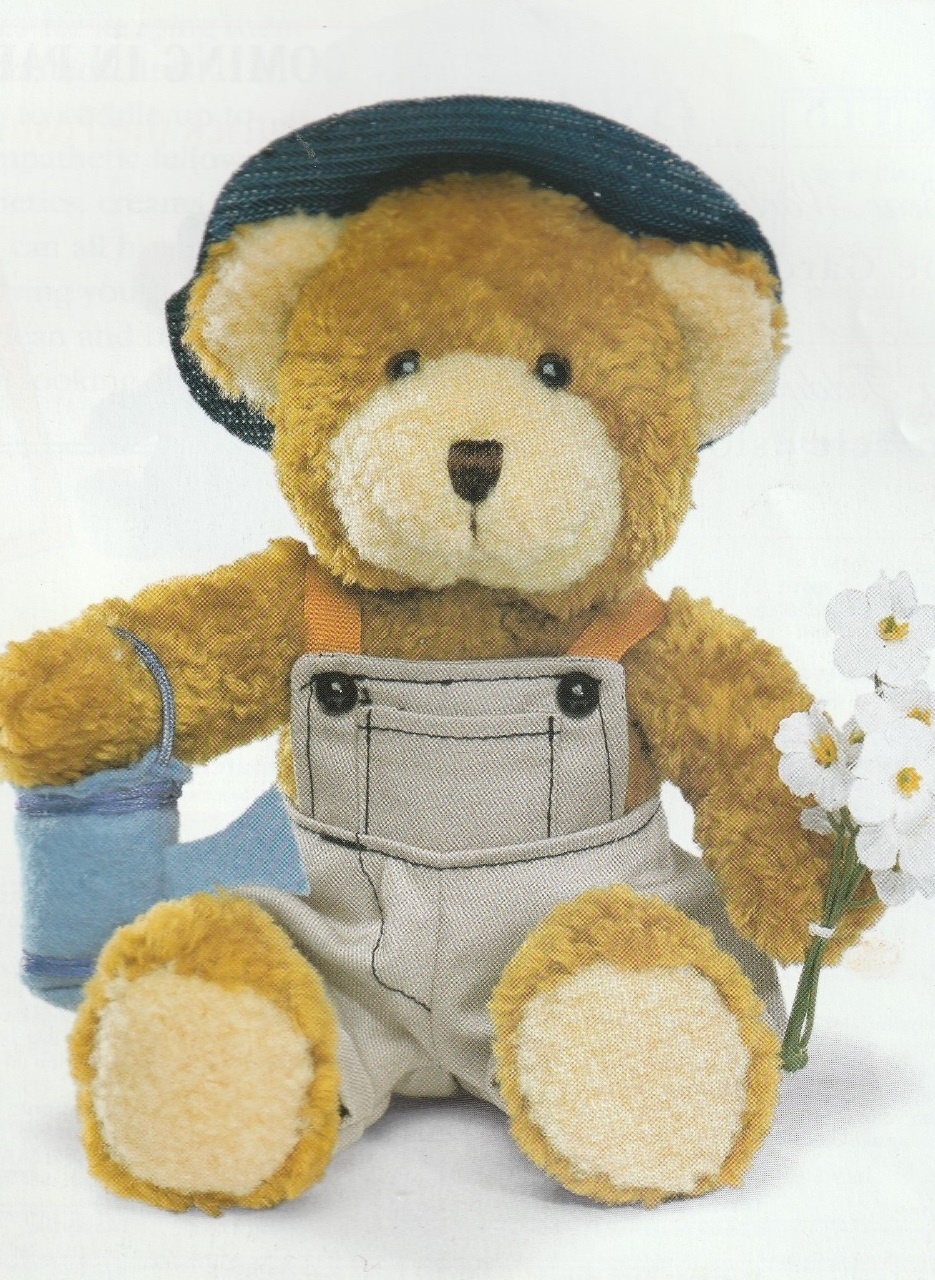 Geoff the Gardener usually watered and picked flowers but today he decided to dig.

Geoff gardens with a borrowed spade 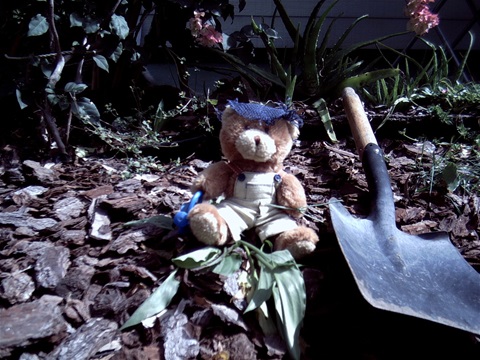 The borrowed spade was very hard for the small bear to use but he stuck in down and stood on the edge.

Geoff the gardening bear was very busy one hot sunny day.   He was digging in the flower garden.

The spade went deeper and deeper into the soil.  He struggled with the heavy spade he had borrowed from the wheelbarrow.  His hope was to remove all the weeds, water the flowers, and then, return inside.

He kept carefully checking to make sure none of the family could see him.  He knew it was unwise for any of the special bears to be outside for too long.  They would be easily missed if anyone noticed the empty space on the shelf.

Suddenly, the spade struck something hard.   ‘I wonder what this is?’ he muttered in his growly bear voice.  ‘A bone! Well goodness me. Whatever is a huge bone doing in my garden?’

Before he could remove it and put it on the ground, the huge black and white shape of Missy the border collie dog came up behind him.

‘Oh, come on Missy’ he said, ‘don’t go on like that’.   You’re making too much noise.  Whatever were you thinking putting one of your old bones in my flower garden?’

‘It’s my secret hiding place’ Missy barked, more softly now.  ‘It’s where I store all my supplies in case I  get hungry.  Whatever am I going to do if you dig them all up?  One day I might starve.’

‘We live with very special people.  None of them would ever let you go hungry.’

‘Oh, I suppose you’re right’ Missy whined.  ‘But, what will I do now?  You see I have to hide bones somewhere even if I do get enough to eat.’

Missy sat back. She tilted her head to one side, and thought deeply.   ‘I really don’t know, but it was something both my mother and my father used to do when I was little.   I guess it’s a sort of ‘dog’ thing.’

‘It’s a bit strange to me.’ Geoff leaned on the large spade for a moment. Then, he smiled up at the anxious-looking dog.

‘What if I put some soil over there near the fence under the big tree? You could have it as your special place. I won’t tell anyone. You must promise me that you will never bury bones in the garden again.  Do you promise?’

The black and white dog barked loudly and bounded in excited circles round and round the yard.

‘Oh, thank you. Thank you very much.  I really would like to have a place of my own like that.’

It took all of Geoff’s strength to hold onto the spade and maintain his balance as the dog began to lick his little bear-face in her enthusiasm.

‘My pleasure to be of service.’  He bowed formally and seriously.  He forgot he was leaning on the spade.   He over-balanced and sprawled at the dog’s feet.

The dog thought it was funny and began running   around the yard barking in excited piercing yelps.

Geoff dusted himself down shaking his gray overalls back into place and ramming his blue straw hat firmly back on his head. He stood up.

The dog trotted beside the small bear.  They laughed companionably together.

Inside the house, old Ted muttered. ‘Bears wandering all over the place in daylight are a BIG worry to me.   One day they’ll get caught and we’ll all be in trouble.’

Henry the Hiker who had just climbed back into the house through the window, nodded in agreement.

‘Oh yes it’s a terrible worry.  Special bears like us are such a problem.’ He spoke seriously but suddenly began to laugh.

The laughter spread until all the bears were chuckling.  Even the ones in the cupboard joined in.  Ted thought the sound would carry and the humans would surely hear them.

Sophie in her cat-basket snarled a soft meow.

In the quiet stillness of the afternoon, no one came to disturb them.

Finally, the room was quiet again as they settled back to doze.

Only in the distance could Geoff still be heard singing.

The spade was heavy so he moved with slow thoroughness.