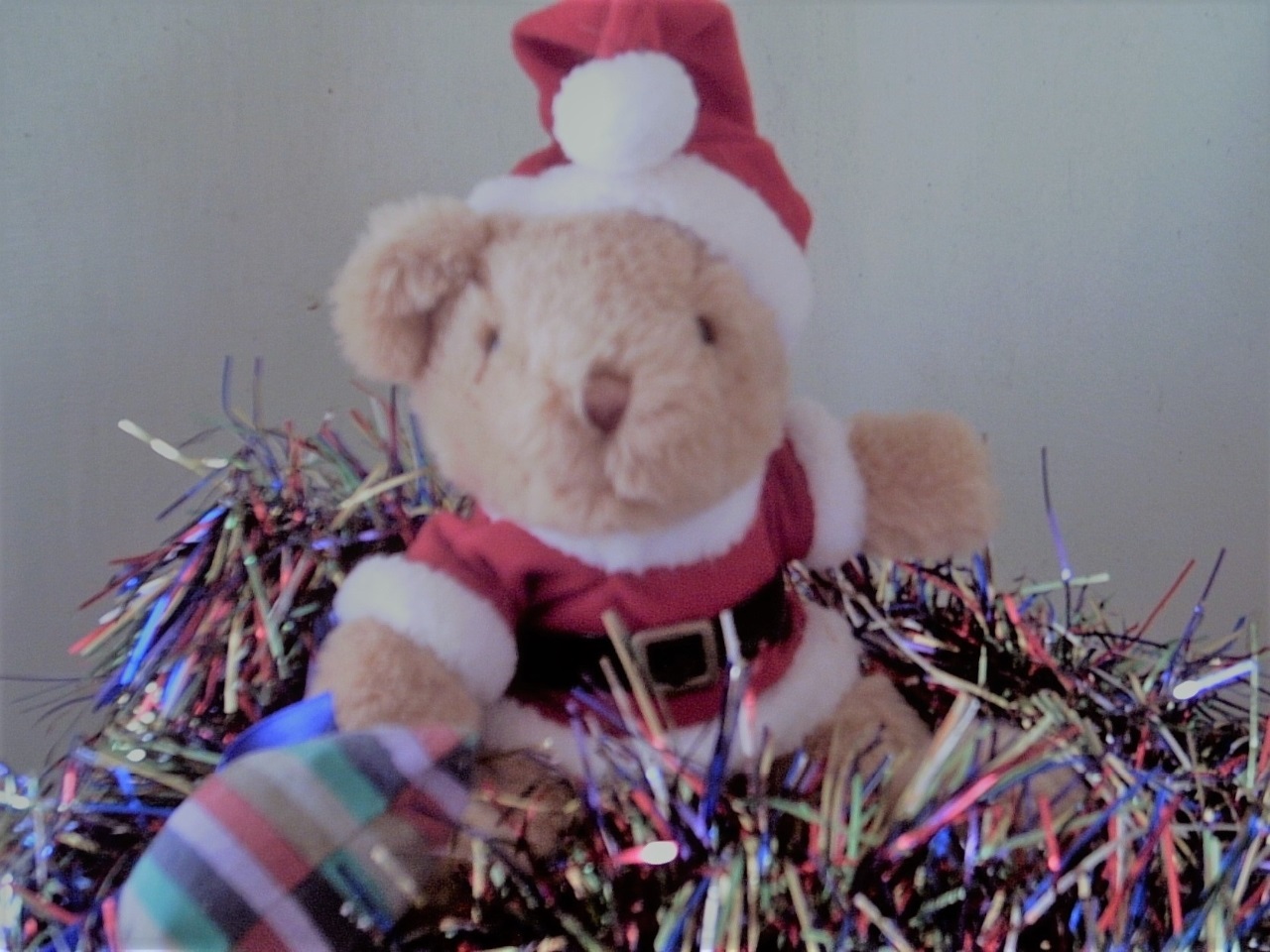 The Bear who learns the meaning of Christmas from the Christmas Tree angel.

The house was quiet and still.

Bears stood in neat rows on lounge-room shelves dozing in the night-time summer heat.  Suddenly, from inside the cupboard, with sliding glass doors, a voice spoke.

‘I feel very silly’ a small light- coloured brown bear sighed.  He sadly shook his head.   The huge white pom pom on his red and white hat bounced like a tennis ball up and down.  ‘Ridiculous’ he muttered again.  ‘I look absolutely ridiculous.  No one else in this house has a bright red coat with white fur on the neck, arms and lower fringe like mine does.  I’m the only bear wearing this stupid black belt too.’  His paw pulled at the buckle.   ‘And, that’s another thing; why have I got a striped bag tied to my paw with a present in it?

‘It’s only junior in the cupboard complaining again.  He can’t understand why he’s dressed in such an unusual costume.’

There was general shuffling and muttering but finally everyone went back to sleep.

That is, everyone but Santa Bear.  He sat peering into the darkness wondering.  ‘How will I know when it’s the right time?  I guess I’ll have to sit here and wait.

Santa Bear waited.  He had no idea what he was waiting for.  He tried not to make any more fuss.  The others had been in this house a lot longer than he had. They knew a lot more than he did.  Still, it was very hard. Dressed as he was, he felt different to the others. He hoped something would happen soon to answer all his questions.

He was often hot in his strange suit. How could I be expected to work in this very hot costume.

As the summer days passed, he peered through the glass watching the children playing. His thoughts spiralled. What am I here for?  Why do I look such a dork?

Then, one morning after several days of rain, and a thunderstorm that made the house shake, unusual activities began happening in the room viewed through the glass.

The children were excited.  They made paper chains and opened boxes on the carpet filled with tinsel and stars.  A golden angel winked at him as she was carefully unwrapped and placed on the floor.  ‘Wait till you see me on top of the tree’ she whispered.  ‘It’s the most exciting place to be.  For days and days, I get to see everything that’s going on.’

The little bear pressed his nose against the glass and watched as a large green tree was placed in the corner.  It was beautiful.  The children carefully covered this tree's branches with twinkling lights and coloured strands of tinsel.  Tiny figures and large bright balls were hung everywhere.

His wish was granted that same night.

The father came home.  'Wow!' he said, 'the house looks beautiful and very Christmassy'.  unexpectedly, he asked, ‘where’s the little bear dressed in the Santa costume?  There is a special place for him.’

‘I know! I know!’ Six-year-old Sarah danced across the room.  She slowly opened the glass doors of the cupboard.  Carefully, she brought out the little bear.   She hugged him tightly and kissed him on the cheek.   ‘Here he is dad.   He’s Santa Bear.   Isn’t he beautiful!’

‘Yes he is. At this time of year, he is indeed the most special of all the bears in the house.’

On the shelves, and in the cupboard the other bears cheered.

‘Told him it would come his time’ Old Ted muttered to Joseph.

Santa Bear was placed on a special stand surrounded by tinsel. Then he was gently placed beside the Christmas tree.  He had a wonderful view of the whole room.

On Christmas Eve all the presents were placed under the tree. He could see that the one on his paw matched some of the paper on these gifts.

‘I’m a symbol’.  He finally understood.  ‘To children I’m a symbol of unselfish giving.   I’m the bear that shows to give is more precious than to receive.’

He settled back.    Now he knew he was in the right place.

The family sang ‘Silent night’.  Even the children prayed, and said ‘Thank You!’

The music soared and filled the room.

A strange peace and stillness settled over everything.

He realized. They celebrated a birthday.  They gave thanks for a baby called Jesus who came to show the world a better way to live and to follow Him and guide them into eternity.

The Christmas angel cried softly. A gentle trickle of her tears fell on the small bear’s nose.

‘Don’t be concerned ‘she called down to him. ‘It always happens. It’s cause I’m happy.’

A man in a red suit, many, many years after the Child’s birth, wanted all the poor and helpless to know about Him and His Love.   He dropped gifts of fruit and nuts and often small gifts, down unlit chimneys.

His red suit against the blinding whiteness of the freezing snow was a reminder to all of Hope for a better future.

He was very happy.

I would not want to be any other bear in the whole world.

A HAPPY, PEACEFUL, HOLY CHRISTMAS EVERYONE!

The Angel knew the story