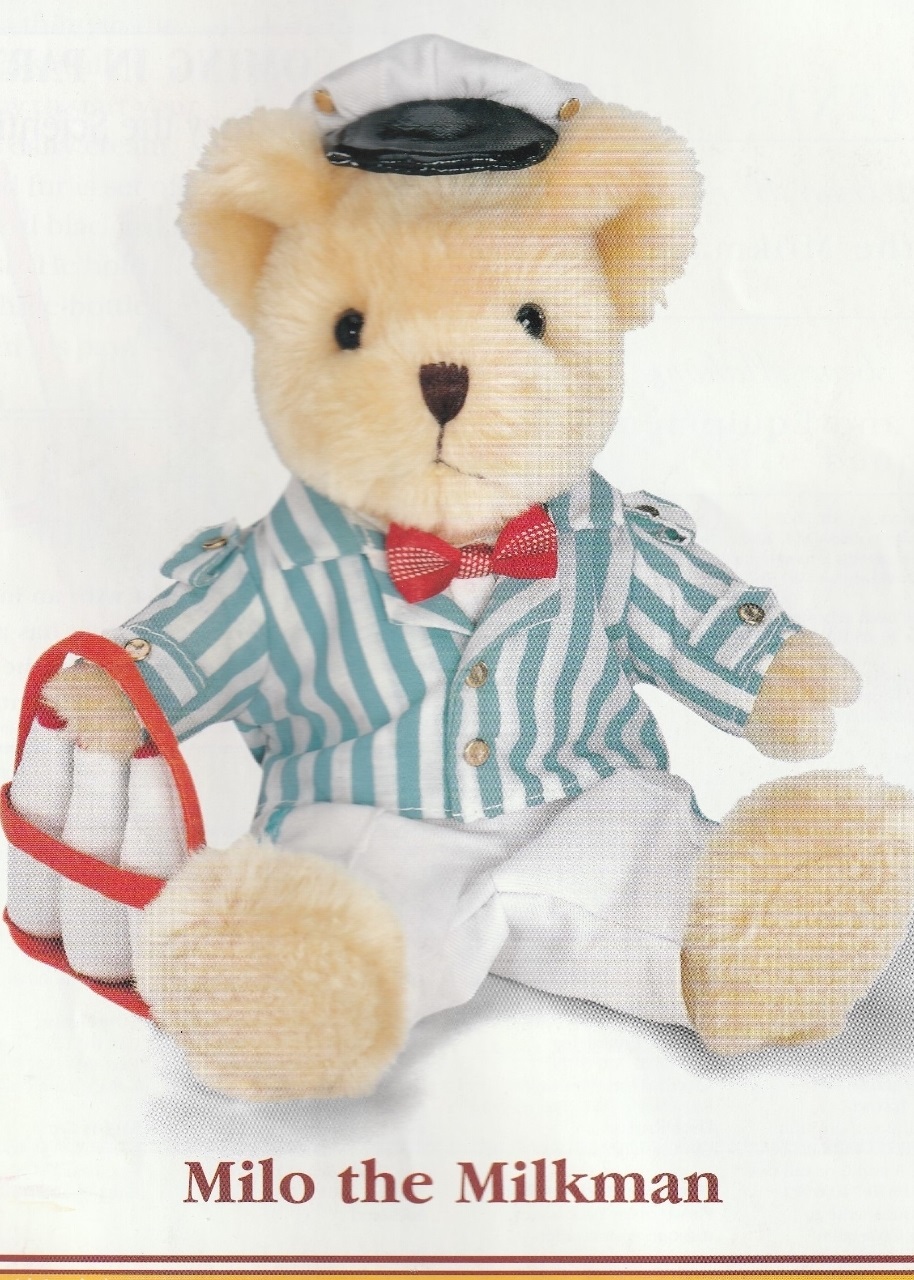 CURIOUSITY CAUSES HIM TO FALL

Milo found himself part of the after-party mess.

Milo fell from the top shelf of the bear cupboard.

With a dull thud, he landed on the hard, polished timber floor. His milk bottles were not broken but they clanged together. Their metallic strengthening components jangled like chiming bells.

One child from the ten gathered around the table, for a birthday party, cried out.

Only the alert bear community could hear.   Row upon row remained fixed in their placid positions of normality.

Below the drama unfolded.

‘I want to cuddle him.’  Children’s mixed voices came from around the table but, then hands began to clutch at Milo’s clothing, and he felt himself being jostled and pulled.

Ten-year-old Daniel gave the bear’s foot a poke.   ‘He’s very soft.   Be gentle.   He may not be made for rough handling.’

Mother Kate returned to the room.

‘Back to the table everyone’ she called ‘Let’s all have more food and I’ll cut the cake and then we’ll have ice-cream.’

‘Please can I bring this bear with me?’ Melanie asked as she grabbed Milo off the floor and cradled him in her arms.

‘No!’ her brother Daniel shouted. ‘Put him back and come to the table.’

‘He’s coming with me’ Melanie insisted.   ‘I’m bringing him.’

She stamped her foot ‘It’s none of your business!’

Kate’s startled eyes could hardly comprehend how one of the most delicate of the Bear Collection had appeared and got mixed up with the children’s party.

She gently removed Milo from Melonie’s passionate embrace and said kindly, ‘I’ll stand him next to the birthday cake, and, everyone will be able to see him.

Later, I’ll tell you a story about him, and the other bears. Then, we’ll go outside for ice-cream and watermelon.’

Susan, the little girl who lived here and fed the goldfish, was ten today. Milo wanted to clap his paws.   All the watching bears longed to join in the Happy Birthday, Susan song.

Mother’s story about the shelf bears captured the children’s attention.   She told them how, one at a time, these strange little bears dressed in very unusual costumes, arrived to live with the family bear members who already lived here.

'We don’t know a lot about Milo.   He is dressed like a man who delivered bottles of milk to houses a long time ago.(Today, we buy milk from shops.   It’s no longer in milk bottles.)

Milo is part of the family and is loved and appreciated by everyone living here.

Unusual things sometimes happen with these bears.  I have no idea how he came from his protected corner place to be on the floor. Perhaps it was a wind gust.’

She shook her head.  To herself she muttered, there’s usually no normal reason for what happens to these bears.

After a lot of eating, drinking and laughing, the children meandered outside for ice-creams and watermelon on the lawn.

Suddenly, a small hand grabbed him, and he was whisked away.

Melonie’s voice gently soothed.   ‘Little white bear,’ she cooed.  ‘I’m taking you outside to see the big world.    Maybe I’ll even take you home with me.   For now, we’ll sit by the pool and watch the people swimming.’

Six-year-old Melonie hugged him with passionate determination and together they plopped into a light plastic chair beside the inground pool.

Milo enjoyed the sunshine, the swimming, and all the laughter. He wished Melonie would not hug him so tightly but was happy to see this wonderful outside world.

Unexpectedly, a wet ball from the swimming pool was lobbed towards the waiting, open-mouthed, dancing black and white collie somewhere behind them.

It splattered against the back of the chair. Milo felt Melanie’s hold on him slacken. He slid face-down onto the grass.

The wet ball landed somewhere on his back.  He could feel the moisture seeping into his collar.

Missie pounced. She saw the small bear just in time, and as she scooped the ball off his back, carefully positioned her paws to avoid standing on him. Moisture from her very wet fur cascaded down on the helpless bear like a wild shower of rain.

Missie sat back on her haunches with head cocked and brown eyes looking concerned.   She looked down at the helpless bear. The ball was clenched tightly in her teeth.

‘Please help me’, a small voice cried from the ground.

‘Be right back’ she snuffle- barked around the ball. ‘I have business to attend to first.’

She then began her collie dance around and around the pool.    She shook the ball violently.

Voices began entreating.    ‘Give it back!’

‘Come on dog, stop mucking around.   Bring the ball back.’

She ran as far from the swimmers as the small pool allowed and gently placed the ball just out of arm’s reach on the grass.

Missie danced her way back to Milo. With one fluid motion, she picked him up and clenched her teeth on the back of his jacket. She ran at full collie speed through the back, screen-door.

She flung the bear at the foot of old Ted’s armchair and barked once.

‘Hope you can help this poor little wet bear.  Maybe I can help again later.’

She returned outside and ran around and around the pool in a demented attention-seeking mode. Stopping abruptly. with tongue lolling, and brown eyes appealing, she barked loudly and excitedly.

‘Send me another one please. Let’s play lots and lots.   Let’s not go back inside for a long time.’

It was not until most of the visitor’s cars had departed that a tearful Melanie came to Kate in the house.

‘I’ve lost the little white teddy’ she sobbed.  ‘My Mum said I had to tell you. I took him outside and dropped him near the pool.   He’s disappeared.’

Row after row of bears stood unblinking and still.

Mum carefully removed Clint the Cowboy and Clement the Chef. ‘There he is, Melanie.  Milo is on the shelf at the back’

Melanie looked in.   Milo stood proudly holding his carton of milk bottles.  His back was firmly wedged in the corner. The child smiled.

‘Bye dear little white teddy’ she called as she skipped to re-join her mother outside.

Mother thought she saw Milo wink.  She shook her head in disbelief.

‘Missie, Missie’ she said as she fondled the dog’s ears.   ‘If only you could talk.   I’m sure you know what happens around here.

Sophie the cat groaned. ‘I’d have such a lot to say if only I could find someone to hear me’ she mewed.

‘Don’t forget we all can ‘ Old Ted responded from the arm-chair.     ‘Come and join us tonight.  I’m convening a Conference.   We’ll discuss what happened today and plan further safety measures.’ 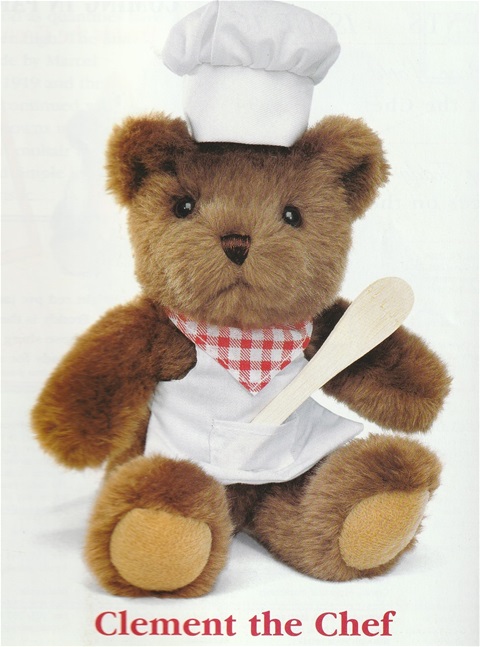 The night was extremely dark. The only light came from the moon.

Sophie the black and grey-white cat is curled up beside Missie, the black and white border collie dog.   They look relaxed and comfortable.

Only one bear, old Ted, stands on the mat facing the bear cupboard and shelves.   (  ‘Don’t worry I’ll help you get back up on the chair’ Joseph had promised.)     Bear faces were concentrating on his face and listening to every word.

Slowly, clearly and precisely, the old bear spoke.   ‘Milo has told me that excitement about the children’s party caused him to jump excitedly and he toppled off the shelf. I don’t think it is the full story.  Does anyone else wish to speak?

Clint the Cowboy and Clement the Chef both then confessed to their part in the day’s event.

Clint spoke first. ‘There are three of us in this alcove corner of the top shelf.  For protection of our fur and the small additions to our costumes I believe we were placed there for safety.  However, for a few months now we have been playing a game of ‘place swopping’.  No one ever noticed but we took turns at who was to have the best lounge room view.   It was my turn, but Milo was excited and wouldn’t move.’

Clement interrupted.    ‘We tried to push him out of the way but must have shoved too hard.  He shot right off the shelf.’

‘It was an accident they chorused in unison.   We’re very sorry.’

‘Sorry Milo’ they said as they looked behind them into the darkness.

‘It ok’ Milo replied. ‘It’s been an adventurous day.   I’m still very dirty and damp but happy to be home.   I thought for a while I was going to be kidnapped.’

Old Ted stood very still and thoughtful.   When he spoke it was with understanding.

He nodded his gray head.  ‘Thank you.’

Now, more seriously he spoke clearly to all listeners.

‘ I have been aware for some-time, we are developing a problem. Perhaps

to-night we could work on a solution.   First, I am asking for help to restore MIlo.   His back is a dirty mess.   He will need cleaning and perhaps repair.’

Surprisingly it was Sophie the cat who spoke first.   ‘I’m pretty good at grooming and cleaning’ she purred.  ‘If Milo doesn’t mind my rough tongue I reckon I could help restore his fur.’

‘I’ve got a comb in my backpack and maybe a needle and thread’ said Harry the hiker. ‘I’m happy to help.’

‘Please let us help’ said Clint the Cowboy, and Clement the Chef.   Perhaps together we could repair the tear in his jacket.’

‘I’ve got some sticky artist’s resin’ called out Alphonse the Artist.   You could use a little instead of sewing.   It should hold the edges together.

Plans were made and Ted arranged for Milo’s restoration to be undertaken as a community effort on the following night.

‘Now an important discussion for the future. 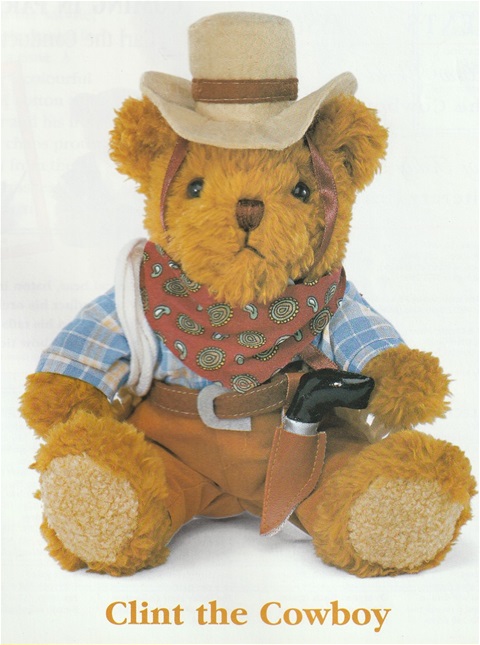 Clint also pushed Milo.
He will be Guest Speaker at first Concert.

Please Joseph would you and Sue Care Bear stand with me.   Tell everyone what you think may benefit them all.’

Joseph cleared his throat. It was Sue who spoke first.

‘We believe that all of you need an opportunity to come and tell us about yourselves.   We are wondering if we could have a regular Concert Night so bears who are not visible, unless something unexpected occurs, would have an opportunity.   It would be like a story telling night with maybe even plays.’

Joseph’s growly voice added.  ‘Some of you have unusual costumes and are unlikely to be seen.   You all should be given the opportunity to be seen and heard.

Perhaps in this way we’ll limit dangerous adventures and accidents.   There will be less likelihood of upsetting the humans as well. I have asked Clint the Cowboy if he will be our first guest speaker.’

There was laughter and cheers.

‘Thank you everyone for your kindness to me today’ Milo added.

Ted now concluded the meeting. He gave them all a brief nod.

‘Back to sleep, folks and we’ll let you know the night of the first concert when we ourselves know.’

He held out a paw and Joseph heaved him back into the armchair.

It was astonishing how still the room was when everyone settled.

The only sound was the filter on the fish tank.  It hummed as two fish swam around thinking about the amazing environment, they lived in.