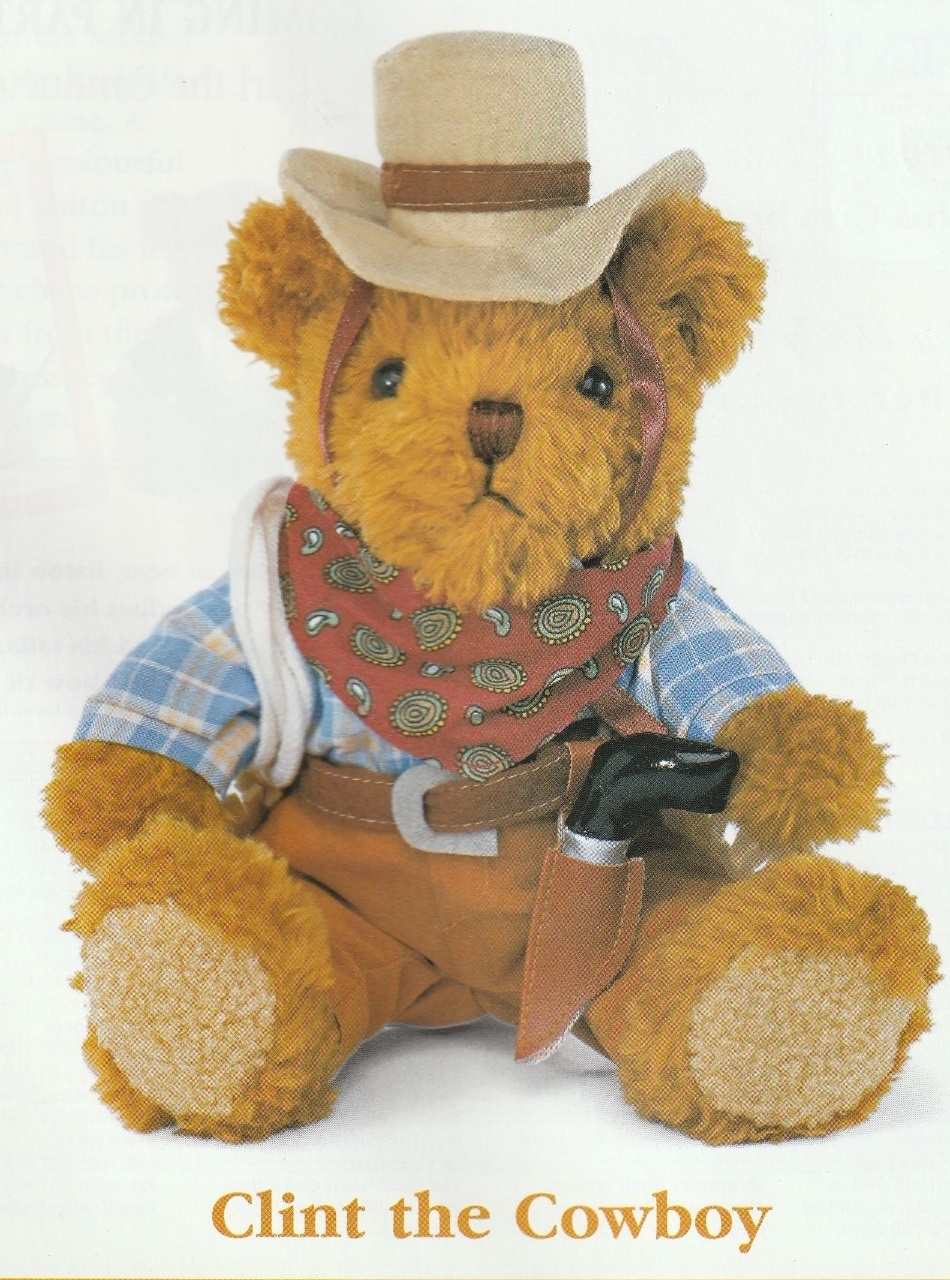 Clint was asked to be the first speaker at the planned concerts.

Word spread from bear to bear.   It was whispered across the shelves and into the cupboard.

‘To-night will be the first concert.   Clint the Cowboy will tell you his story.

When it has been dark for several hours, listen for Missie’s bark.   She will circle the room once, then bark loudly twice.   She will disappear outside and wait to make certain that humans have not been disturbed and come to investigate.

She will then return and snuggle with the cat, on the mat near the television.

When you see this……. make sure everyone has a good viewing position.

If I clap my paws or Missie barks sharply, know that there is danger. Return to your places and assume sleeping positions immediately.

I hope you  all have a great evening. ‘

Old Ted settled back into the armchair, certain that the message would spread like wildfire and Clint would have an attentive audience.

That night when soft rays of moonlight fell upon the small fluffy, lounge-room mat,  a light brown bear appeared.

He bowed towards the watching audience.

As he straightened up, his soft caramel-coloured feet began to vibrate, while his  little legs pumped out an enthusiastic jig.

He waved his hat on the end of his gun then once again formally bowed.

When his gun was safely returned to its brown leather holster, he shoved his hat back on his head and began his story.

‘My first memory of being part of a collection of magic bears was the morning when I stood on a table at a place, I later heard called a factory.

A man pushed a trolley past and a bear in a strange bright red outfit with a red hat spoke to me.  He asked, “What is a bell-boy?”

‘I had no idea, so I politely shook my head.’

‘He replied, " Well, I know who you are, and have some idea what your costume represents.

“You are Clint the Cowboy”, he said with  a touch of arrogance.

To my amazement, as I cleared my throat,  I found I could also speak.

I never saw him again until we met up unexpectedly on the day I came here. He’s up there somewhere on a high shelf.

Please if you are there bell-boy bear, would you wave your paw and let us know.'

Sue Care-Bear, watching from the safety of Joseph’s lap said.

‘I don’t think I’ve ever seen a Bell-Boy Bear.  What’s a bell-boy bear? she asked Joseph.

He growled deeply in his throat.

‘Not too sure myself, little one. Let’s wait and see if he makes himself known. ‘

From the top shelf in the deepest darkness came a polite cough. 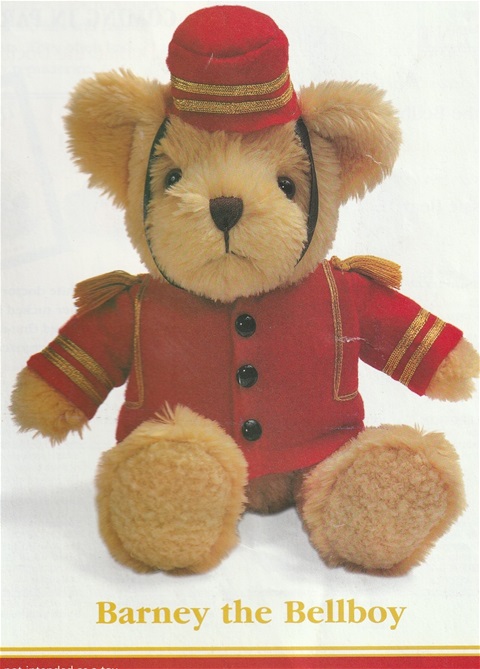 Barney has been invited to tell his story.

A paw waved enthusiastically, and an unseen voice called out.

‘Hi! My name is Barney and I am called Barney the Bell-Boy Bear.

Bear voices joined in such an enthusiastic greeting the shelves shook.

‘Welcome to you, young fella.   I'm glad to know you are there.  Perhaps you would like to be our next guest speaker when we hold another concert?’

‘Thank you, I would be delighted.  I’m shy but would like to officially meet everyone.’

Clint waved his paw in acknowledgment of Barney’s wave and cleared his throat before saying,

‘I saw many other magic bears from a distance, but Barney was the only one I spoke to in the factory.

One day a lady came.  She stood by the table I was on.  Gently, she poked my stomach. ‘This little cowboy bear is coming home with me today.  I will check out his costume and make sure it is authentic.’

‘Fine with me’ the man responsible for sewing and making my garments said.    “He is ready for being part of the Bear Collection as soon as you have authenticated his outfit.”

‘I had no idea what being authentic meant.   I was happy to know I would be recognised as a cowboy but didn’t know what a cowboy was meant to be.

Estelle, put me in a deep bag, slung it over her shoulder and left the factory.

It was dark inside with lots of bumping and sounds of traffic and loud human voices.

I wondered where I was going and what was about to happen next. 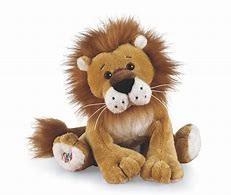 THE JOURNEY TO COMPLETION

‘I could hardly believe it’ Clint continued.

‘I was placed beside a huge golden lion. I was unsure if he had magic abilities and was a bit hesitant about initiating contact. Later, that first night, I felt a huge paw on my shoulder and a growly voice spoke in my ear.’

“Do you understand me?    I also speak Spanish, Russian and German.”

‘I nodded, almost dislodging my hat.   English is fine.   Hello to you!’

I was shocked.  I was not sure what hunters were but somehow, I got the impression they were people who shot lions.

“Perhaps Jack who comes in on Fridays will be able to help you” the Lion added.

Then he turned his back.

I got the impression he no longer wished to communicate.

I  privately named him Goldi.

It was late at night.   Darkness cloaked the whole room.   I could see nothing beyond the end of my nose.

I woke up shaking and alert.

"I’m very sorry I woke you.   I wanted to say goodbye.  I realized it would be Thursday when the sun rises.    I heard a lorry driver call out a few minutes ago that he would be leaving before the sun rose. I was told last week I would be leaving with him.

There is to be a children’s themed party at the pre-school on the other side of town and all jungle animals will be part of the display.   It may mean if the school wishes to keep me, that will be my ‘forever home’.

I’m sorry I was not happy about your gun.   I hate all weapons.   It’s not your fault.   I hope the human called Jack will be able to answer your questions.”

I patted his paw and he lifted it and again placed it on my shoulder.

“I’m happy to have met you little bear.”

He was taken away by a smiling lady pushing a trolley laden with jungle animals.   There were zebras, monkeys, and what I thought were Hyenas.  One of these creatures smiled at me baring his teeth and swishing his tail.

I suddenly felt very alone on that table.

Filtering fingers of light, from the rising sun, danced across the table’s surface.  It  highlighted spaces left by the departed animals.

The human, called Jack, swaggered into Estelle’s space as expected, on Friday morning.

He stood in front of me and shouted.

‘Estelle m’dear, this little cowboy looks authentic enough to me for his purpose.

He’s great, and kinda cute.  I’d like to put him on my horse, maybe add some spurs to his little legs and take him for a gallop.

Aw come on!  I’m only joking’, he said, as Estelle came charging round the table.

‘Don’t touch him’ Estelle cautioned.   He’s going to join the Bear Collection and will find a home with them.  I don’t want him getting dirty.”

‘I learnt a lot from these two humans by just listening to their conversations.   They spoke about ‘cowboys’, and I absorbed as much as I could.

At least it was confirmed I was ‘authentic’ and was later gently packed in a ‘tissue-lined’ box and one day unpacked at this place here, where there seem to be bears all over the place.

It’s been an amazing journey and I’m very happy to be with all of you.’

Clint clicked his paws together in a formal salute as he bowed at the audience.      ‘Thank you everyone!’

He turned as if to leave but suddenly stopped.   Turning again towards the watching bear eyes he added……’Cowboys work with cattle, often ride horses, shoot guns – I’m not sure who or what at – should have spurs and a lasso (kind of rope) but Jack said they were pleasant people sometimes called ranchers, stockmen or jackaroos.

It’s all rather puzzling.

I am, after all things are considered, really only a a small brown ‘Teddy’ Bear.

He bowed again and exited into the darkness.

There was clapping and laughter.

The last sound before the room returned to normal was Old Ted’s Voice.

All right folks, Everything back to normal. Time to sleep!

Missie barked her appreciation from outside and Sophie climbed into her cat tower mewing contentedly.