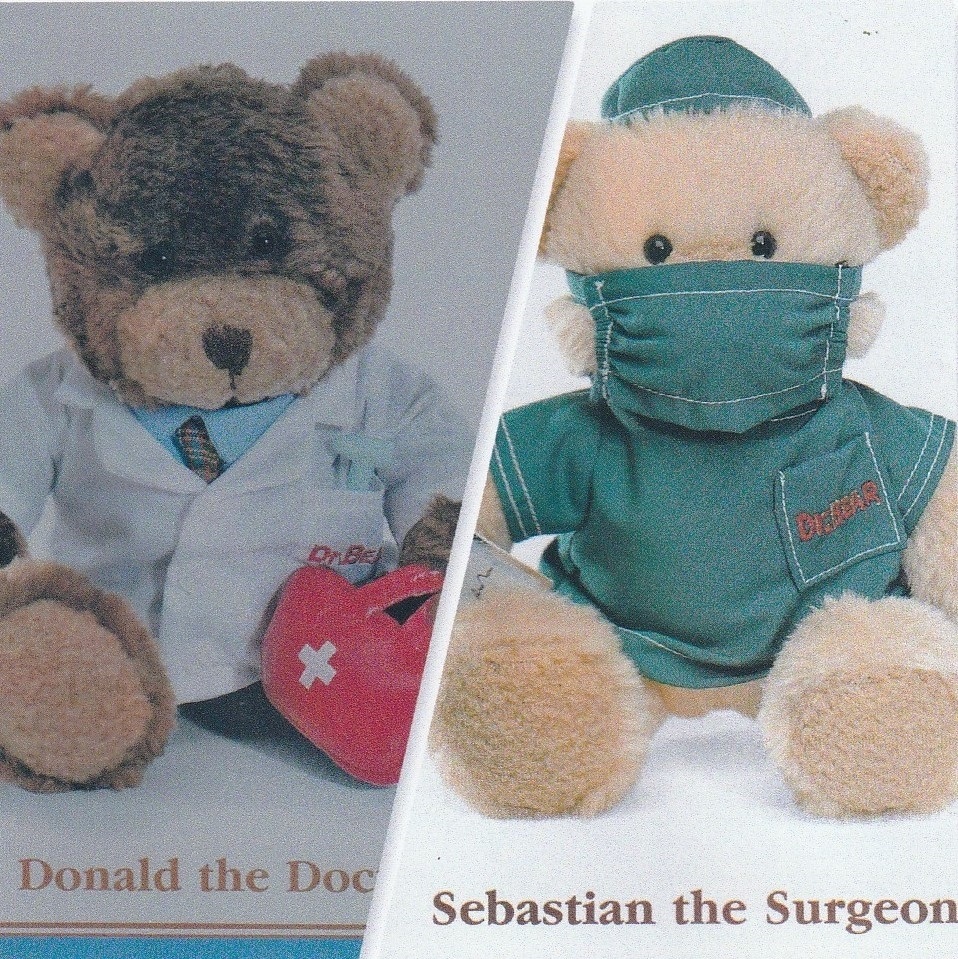 Donald and Sebastian witness A REAL OPERATION. This is their story

The Children’s Hospital nestled beside the Main Hospital.   A huge carpark serviced both sections of the complex.

Dr. Richard Hardy parked in his usual reserved place.   With his medical bag clasped in his right hand and a cardboard box secured under his arm, he strode across the carpark.

He waited for the lift marked Children’s Hospital.

He reached the third floor, exited, and breathing regularly and peacefully strolled across the foyer and entered ward CS1.

He smiled at the nursing staff who returned his greeting by their eyes above green sterile gowns and masks.

Richard shrugged into his own sterile garments before carefully spraying with disinfectant his medical bag and the box and contents from under his arm.

In the corner, near a window, a green screen enclosed a small bed upon which a young child lay.  His small face contrasted dramatically with the pristine-white of the pillow.   Huge eyes of the darkest ebony looked up as Dr. Harvey entered.

Tubes extended from the child’s small body and the jarring humm of a respirator pierced the silence.

‘Hello Josefa!’ Richard called. ‘As promised, I’ve brought two friends.   They are surgical team members and will watch your operation from the high shelf outside and overlooking the Operating Theatre.

They are not ‘white’ scary people, but magic teddy bears.   Look, I'll show you.’

He opened the box which had been placed on the tea-trolley. Carefully, he opened it and brought out two teddy bears. Richard didn’t  seem to notice that both bears bowed and waved their paws in greeting.   ‘Hi!’ said one.   ‘Hello!’ rumbled the voice of the one behind a green surgical mask.

‘This one is Sebastian the Surgeon.’      Sebastian winked, and his brown eyes above the surgical mask glittered.

The five-year-old whispered something.

Richard bent down to hear clearly. ‘I’m not scared now. Please let the bears watch. I’ll look for them up high near the roof.’

Tears silently coursed down his cheeks.

‘I’ll do that right now'  Richard affirmed.  'You keep watching.

With the bears still held in his hands he left the ward.

His chest felt tight and constricted. His heart pumped wildly.

Sick children had always been both his joy as a doctor and his reason for specialising in Paediatrics.

But, there would always be one that made a special impact.

The Josefa Sologar case was one because of its prominence.

A world-wide search had been put in place when the Fijian Health Authorities admitted all their options had been exhausted. They had a small child whose breathing was failing. One lung collapsed completely after an infection and the other now was threatening also total failure.

The boy needs total lung transplant. Is there possibility of this anywhere in the world?

A tragic road accident and the unexpected donation of vital organs from two young victims meant that the large Australian hospital discovered, that from one mangled body they had a perfectly cross-matched, to the Fijian boy, pair of lungs.

It was a heart-rending, heart-breaking situation of tragedy and generosity, but urgent attempts were then made to get the child from across the sea into the theatre as soon as possible.

The helicopter landed and Josefa became a part of the all the lives in this place.   His mother had to stay with a new baby in Fiji.

His father was setting up his waiting position in the special parent's room.

Dr. Hardy carried the two bears and placed them in the galley viewpoint overlooking the theatre.

I know he has the best surgical team in the world and these lungs are a miracle provision - even at such tragic cost to another child- but I know, I know, he needs another miracle.  He’s only five and he is incredibly weak.   Oh please, may it be granted.

Richard did not believe himself to be a man of ‘faith’ yet his heart yearned that this child and his parents who were prayerfully trusting in God would get the answer they wanted.    He said. ‘a-men’.

He walked downstairs to offer a few minutes of his time to the father waiting for news.

Josefa looked up and saw two tiny figures on the shelf.

Donald and Sebastian jumped and waved their paws wildly hoping he could see clearly.

A small smile flickered across the child’s face as he drifted off to sleep under the anaesthetic. 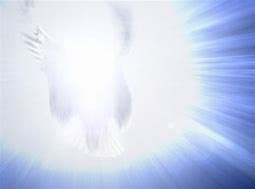 Donald and Sebastian watched the unfolding drama below them. So many humans with concentrated intent were focussed on this small child.

Suddenly, the small space was filled by a radiant light.   The indistinct shape of an ethereal being occupied the shelf beside them.

A gentle voice spoke. ‘Do not be afraid.   Peace! Josefa’s mother has been praying.   God has sent me to stand here watching over her child.’

Donald and Sebastian nodded with respect.  ‘We understand,’ Sebastian said. ‘Magic is the joy of human imagination but only God Almighty performs miracles.’

The angel shed his light of comfort over the two small bears as the three watched in silence.   Only the Angel with bowed head prayed with reference to the One who was above them all.

There were many anxious moments below as the body of the five-year-old human child struggled to adapt and breathe.

‘It is over!’ A Voice said from somewhere in the darkness. ‘This battle is over.’

Below, tired doctors and nurses began to strip off their surgical garments and one by one vanished out the door.

On the bed a small child lay motionless.   Tubes still projected from every-where but the pumping sound of the respirator was regular and steady.

Four nurses and Dr. Richard Hardy took up their positions as the recovery team.

Richard looked up but had no explanation for the golden Light which shone brightly and illuminated the two tiny bear figures.

He would never understand why he did such a strange thing.  He

felt ‘peace’ and a ‘Joy’ never experienced before.

This story was shared with all the assembled bears at the house on the hill.

Uncle Joseph with Sue Care Bear on his lap, asked two questions and Donald and Sebastian closed the gaps in their story by each responding.

What happened next. How did you get from a City Hospital to here?

Being part of The Bear Collection. Tell us what happened.

ANSWERING THE FINAL QUESTIONS ON THEIR JOURNEY 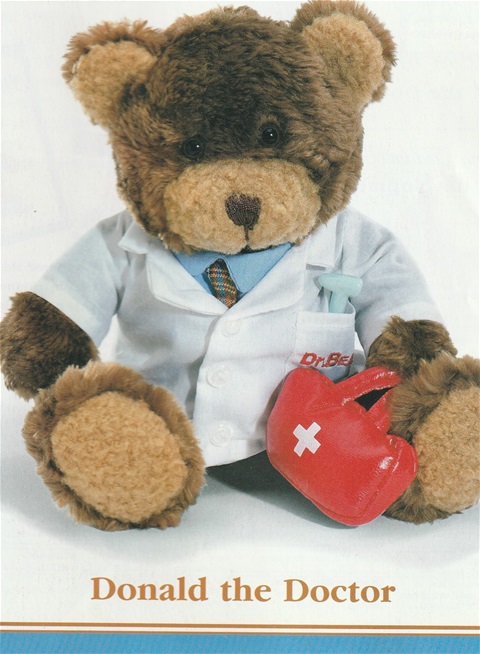 We stayed weeks on that shelf.   We often waved to Josefa. He waved back and we  rejoiced as that child recovered health and strength.

I once waved enthusiastically at Josefa’s father.   He looked a bit scared, so I never did it again.

It was a wonderful experience but we both knew it was not meant to last. 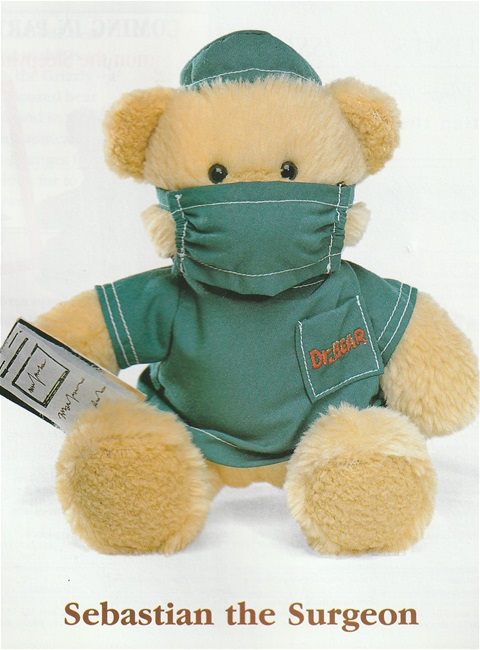 His answer to Question 2.

We were collected from that Hospital by a smiling man who drove a white van.

He came after Dr Hardy had visited and I heard him say to us,(I thought), but maybe speaking aloud to himself.    ‘You’ve done a GREAT job here.  I wish the hospital could keep you but unfortunately, you were only loaned to us for a season.’

The smiling man who was dressed in white like his vehicle also spoke as if to us.    ‘Come along now.   You guys are part of a family.   You belong to The Bear Collection.

One day you’ll be together in one place and you will be appreciated and loved.

After some time in a factory, there was lots of travelling, in boxes.

Here we are! We simply emerged one day with lots of other bears.

Now we have our own place on the shelves.

We are the Medical Team.