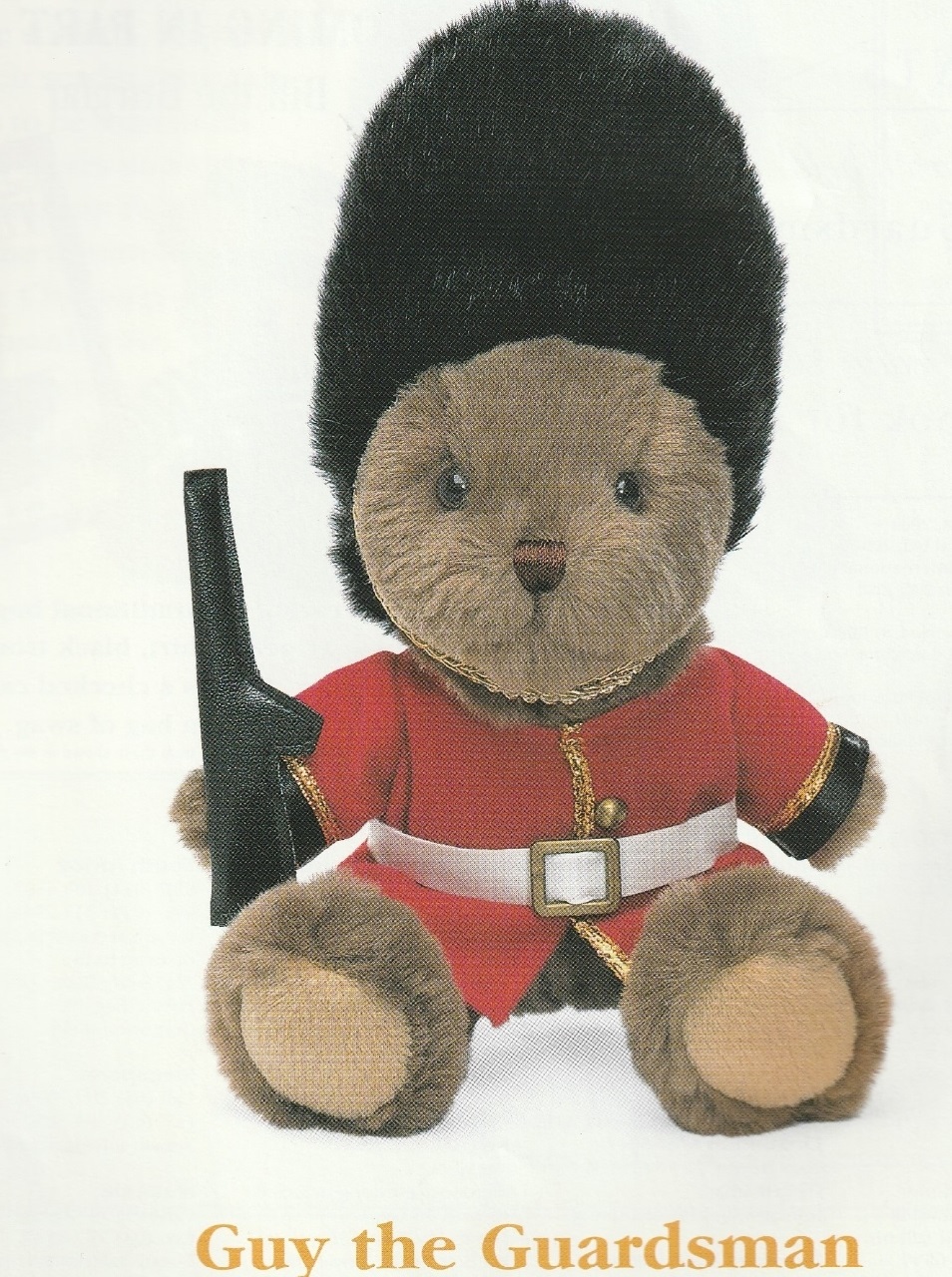 The night the Edinburgh Tattoo was shown on television, the whole family assembled to watch.   Even the teenagers joined as sprawled figures on the carpet, beside the seated parents and siblings

Sophie the cat was on her tower and Missie the dog, nestled her head on the father’s lap.

The attention of the entire bear family was also drawn to the spectacle in front of them.   The bears rarely looked at T.V.  Most nights they slept.

Colour, drama, theatre and the stirring music kept their attention on this night.

A loud human voice suddenly roared out ‘And now ladies and gentlemen we present:

The parade of Her Majesty the Queen's Guardsmen.

There was stirring bagpipes accompanied by brass instruments and drum-rolls.

In rode a company of red-coated cavalry.  Tall black furry hats adorned their heads.   The training and precision showed in excellent horsemen skills.

Behind them marched a battalion of foot soldiers.

These soldiers with discipline and dignity also showed the outward decorative display belied the military skills and training beneath.

As these horsemen and foot soldiers gave their display of precision and training an amplified voice proudly explained: 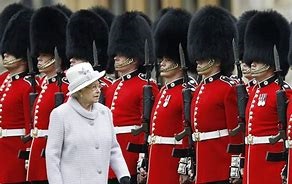 The Queen’s Guard and Queen’s Life Guard are the names  given to contingents of infantry and cavalry charged with  guarding the official royal residences in the United Kingdom.

The British Army has regiments in both Horse Guards and Foot

Guards predating the English Restoration, and since the reign of  King Charles II, these regiments have been responsible for guarding the Sovereign’s palaces.

Despite tourist perceptions, these Guards are not purely ceremonial but in effect are fully

THE HOME OF THE MAGIC BEARS.
THE HOUSE ON THE HILL.

In the house on the hill, Mother suddenly exclaimed. ‘One of our bears is dressed like that.’

She darted across the room.   ‘There he is!’

Guy found himself the unexpected focus of attention.

Guy was grateful for the warning.  His instinct was to greet everyone with a wave and a ‘Hello!’

He remembered he was a teddy bear.  He was dressed like a Guardsman, but the secret life of the ‘magic’ bears must be preserved.

However, he could not resist winking at Father who pretended as always, to have not seen anything ‘unusual’.

Guy spent the next two hours being cuddled, inspected and passed from hand to hand while the military tattoo continued.

Military disciplines and displays, from all over the world, unfolded before their eyes.  It was theatrical drama and very exciting to watch.

Always the shadow of human potential conflict over the world.

A  lone piper piped his closing haunting refrain from the battlement heights of Edinburgh Castle.

It was beautiful, reverent, and as always brought the proceedings to a HOPEFUL conclusion.

‘Time for bed everyone’ Father Dan announced as Mum Kate collected Guy and replaced him on his shelf place.

She kissed the little bear’s forehead, and surely imaged, a bear paw came up and lightly patted her shoulder.

Philip the Photographer and Alphonse the Artist shuffled to allow Guy to settle comfortably in his corner position.

The humans gradually drifted off to sleep and the house settled. 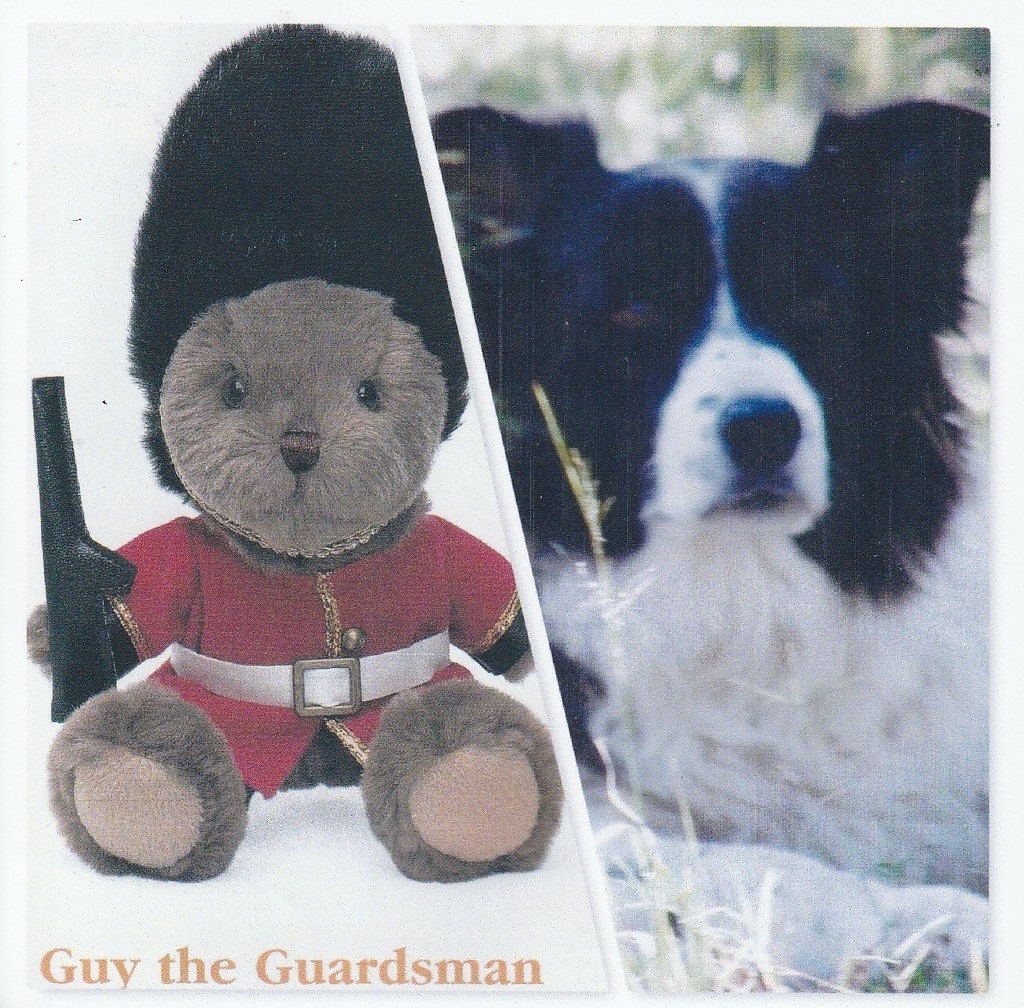 Missie the Collie dog could not settle.   She wandered back and forth and finally sat beside old Ted’s chair.

She barked.   ‘Please could I go and check that Guy is OK?  People pushed and poked at him a lot today.  He may still be feeling a bit upset.’

Missie nuzzled her way through the other bears, gently planting doggy kisses on them as her head passed.    She was balancing on her hind legs with her paws resting between Sam the Sleepy Bear and Fergus the Fireman.

Her nose reached Guy on the second shelf in the corner.

‘You ok, young’un’ she barked.

A little bear face peered back at her in the darkness. He nodded his tall furry black hat very cautiously, shouldered his rifle, then replied.

‘Thank you Missie for caring.   It’s been a night of learning.   I’ve been poked and patted and cuddled. It was often upsetting. However, much more than that, I have learned something important.   I know my costume means something. I’m a teddy bear BUT someone wanted to recreate ongoing living history and now I know why I am called….Guy the Guardsman Bear.’

Missie kissed him.    He patted her nose gently with his soft paw.

The dog danced and spiralled her way outside making even the dog flap on the back door, quiver.

The cat purred from the tower top.

Goldfish splashed in the fish-tank.

The house on the Hill settled into repose. 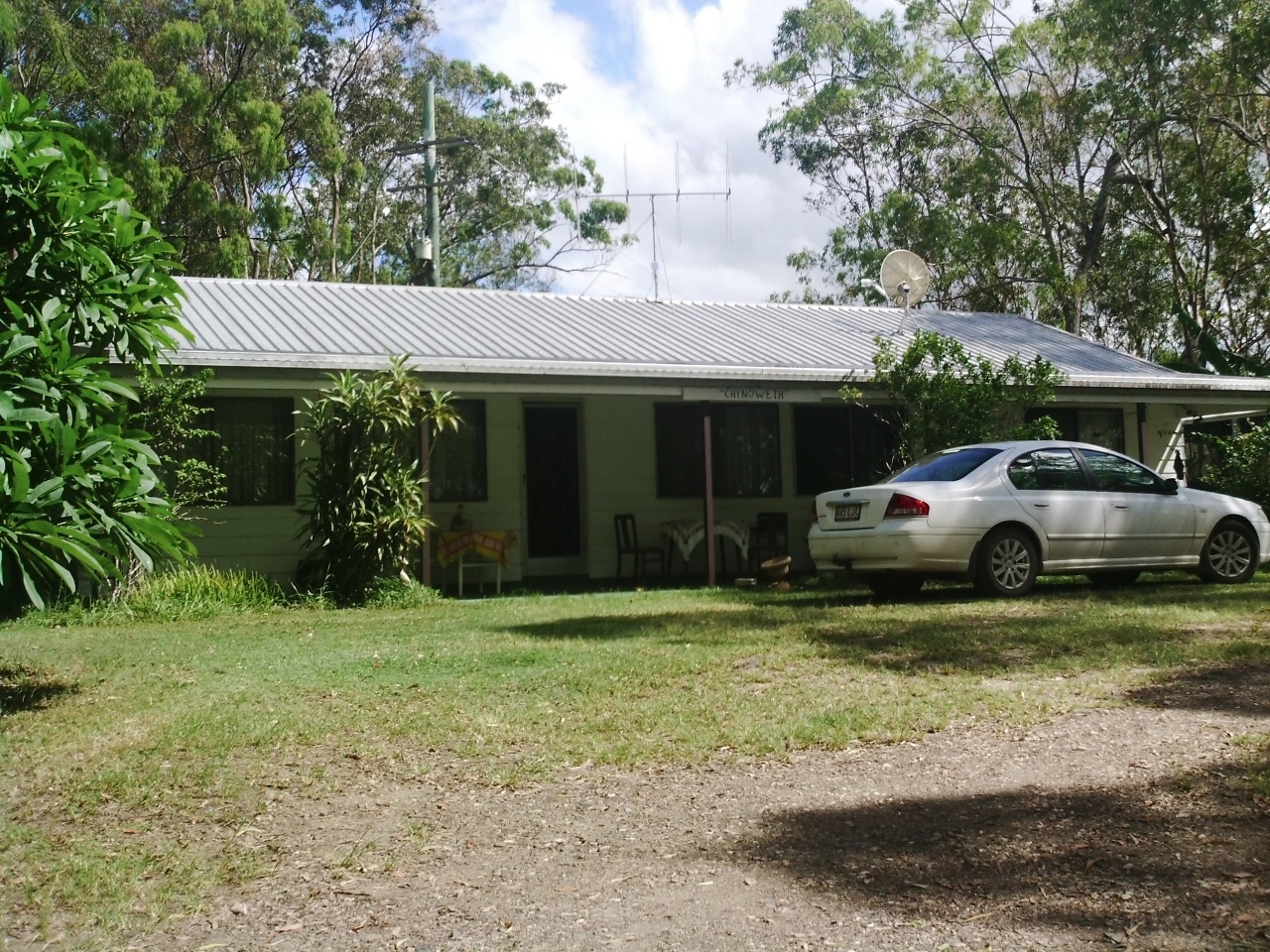 Home to many. Humans and animals. Magic Bears on bookshelves and in cupboards.