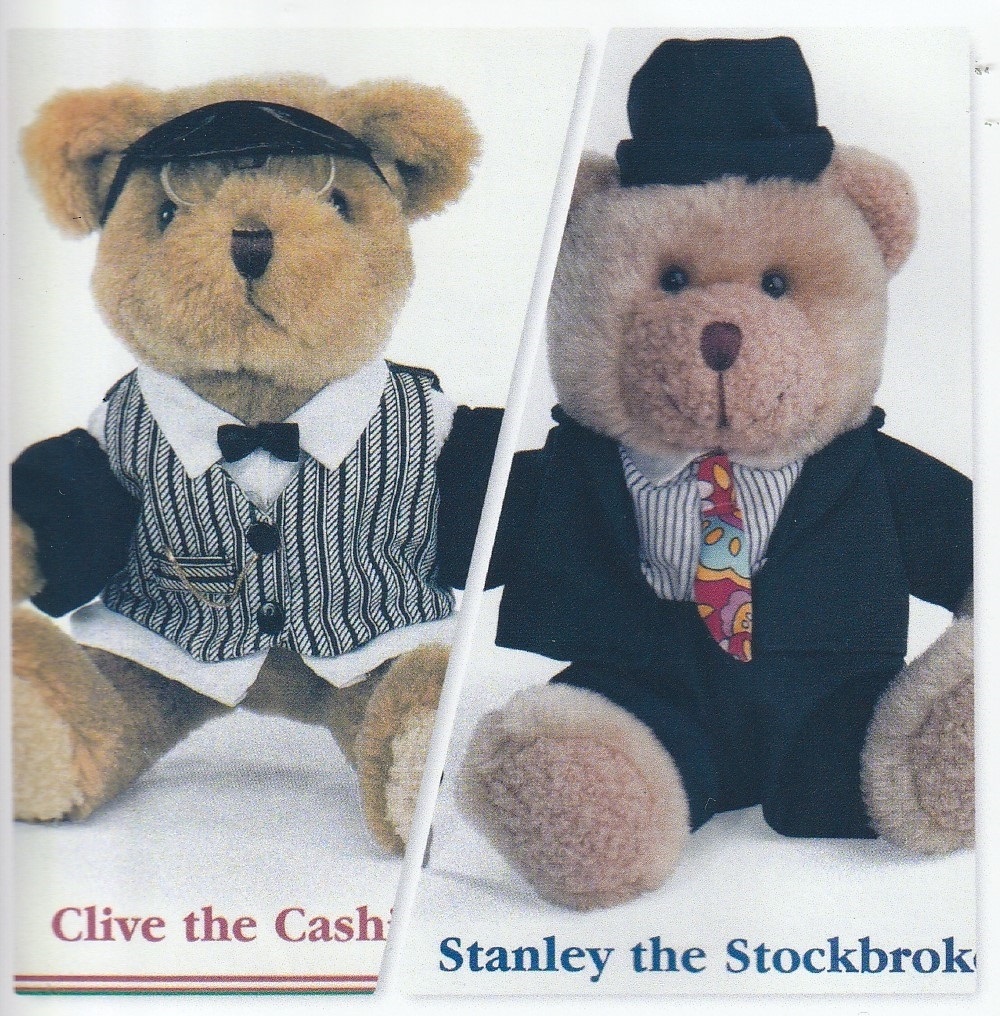 Icons placed as a shelf DISPLAY

The large polished timber desk occupied most of the centre space in the Executive Meeting Room of Bradford and Nelson – Mining Consultants.

Fourteen chairs surrounded the desk.   In one corner was a floor to ceiling bookcase stacked with books of various sizes. These books were impressively leather bound with ingrained golden edges.

The corner opposite the bookcase had one small shelf embedded in the wall.

On this shelf two small teddy bears had been placed.   Each had an identification label attached to the shelf edge in front of them.

The other …. Stanley the Stockbroker

One morning a week before the company was scheduled to close for its four-week summer vacation, the two watching bears were witnesses to an unusual series of events.

The sun had already climbed high in the sky.   Golden rays trickled across the carpeted floor.

Mavis Coleridge, the grey-haired portly cleaning lady, commenced her vacuuming routine.  She flung aside the heavy curtains and sunlight poured into the room.

‘Good morning, Stanley’ Clive nodded towards his neighbour on the shelf beside him.

Stanley’s deeper growly voice responded with a gruff ‘Hello there’.

Mavis continued her circuit of the room, dusting all the bookshelves and alcoves as she went.    As she stood in front of the bear shelf she suddenly paused.  To the surprise of Clive and Stanley this human looked directly at them and spoke clearly.

‘I promise you two little guys that when the rubbish hits the fan, you will NOT become part of the debris.   I will return you to where you came from. You are not part of this crumbling empire.’

She strode across the room dragging the vacuum cleaner behind her and exited into the corridor.

‘Rubbish in a fan?’ queried Clive Who’s going to throw rubbish at a fan?’

‘I reckon’ growled Stanley ‘Something has gone wrong.  Maybe an investment has collapsed or there have been dishonest dealings.  I guess all we can do is wait and see.’ 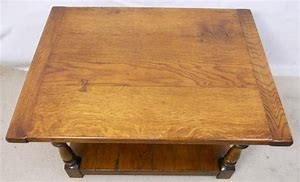 The humans gathered round the table for the usual mid-morning discussion and morning refreshments.

Today, however, there was no quiet talking or relaxed time.  Instead, raised voices pierced the atmosphere from the moment of the first conversation.  There was shouting and angry snarling jibes one to the other.

The glamorous blond graduate from Law School, Susan Seymour was furious.  Her beautiful face and delicately contoured cheek bones were distorted and flushed red with anger.   Her finger-nails tapped the table top like eagle talons.    ‘How can this be?’ she snarled.  ‘$10,000,000 disappeared.   Where?   How could $10.000.000……… TEN MILLION DOLLARS just vanish?’

The two executive Directors who bore the Name of the Company, Derek Bradford, and Charles NELSON, rose to their feet and together faced the assembled group.   Twelve pairs of human eyes focussed on their faces.   Two pairs of brown eyes belonging to small bears, with absolute frozen stillness, watched them all.

Derek spoke first.   His voice was strong but trembled slightly.  ‘I’m sorry you heard this from outside sources.    The truth is brutal – a rival company wants this building and the liquidators have advised if we move out before our annual holidays, we will recover some of our assets immediately.

Charles Nelson interrupted. ‘Look everyone, I’m as overwhelmed as you all must be, but I have hope and an assurance in my heart that the dreadful collapse of markets and this downturn in everything will only be temporary.   You will all receive your holiday pay with bonuses and,  if for now, we must ‘pack up’ everything in our individual areas, let’s label them, put them in the crates downstairs and .......hope, we will, in the near future, be unpacking again.

For now, I regret to say, we only have two days!’

Derek spoke again.  His face looked grey and strained. ‘First of all, guys, I give you a heart-sincere apology that I did not let you know officially sooner.  For two weeks the searching for the missing money was the HOPE we clung to, for deliverance from this collapse of everything.

I still believe that Interpol may come up with something and the police investigation is certainly continuing.   All your superannuation and personal assets remain intact.

Please search for ‘other’ jobs if you desire.

I assure you Charles and I are determined we will rise again from this place of ashes.

For now, we will all have to plan our own future.

Be assured our intention is that Bradford and Nelson will rise and our stock market empire will again take the ‘upward’ spiral.

He struggled to control his emotions and swiped tears from his face.  Shoulder to shoulder, the two Directors left the room.

Shocked human beings collapsed back in their chairs, and the murmur around the table was all about the MISSING MONEY. 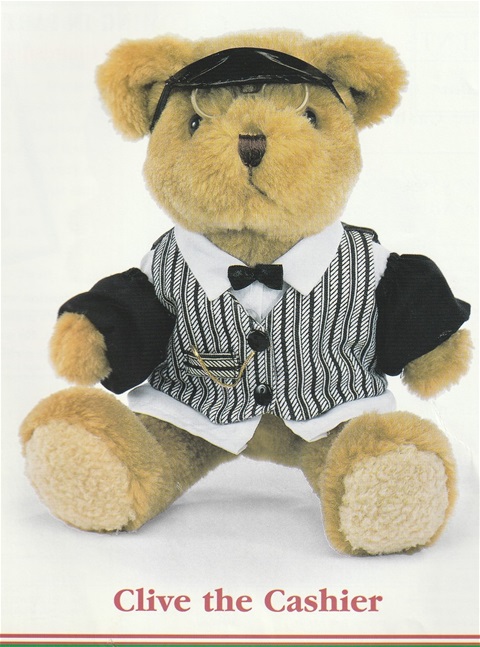 ‘It’s all happened fast’ Clive commented to Stanley. ‘Everyone was still in shock even when the final packing became reality’.

It was the second evening and Stanley growled irritably.  ‘No one worries abut us.  It’s like we’re here but totally invisible. ‘

‘Mavis knows where we belong.  I’m certain she’ll come back for us.’    Clive shuffled and made himself comfortable. ‘Probably tomorrow when she does the final cleaning.’

Eventually both bears drifted into a profound and untroubled sleep.

Suddenly, the silence was shattered by the arrival of two large men. They wore yellow uniforms with SECURITY emblazoned on their backs.  They burst into the room and their large torches cast beams of light which raked through the darkness and illuminated every corner of the room.

‘My God, teddy bears!’   One of the men shouted and then dissolved into raucous laughter.   ‘Silly childish teddy bears.’

‘Come on Bert’ the other voice yelled.  ‘What we’re checking for ain’t here.  Back up memory sticks for computers are small.  We’ve got to be thorough and make sure nothing was left behind.   We have a lot of rooms still to check.’

‘Aw you worry too much.   The boss says the money is safe in the Maldives and the computer hacking virus has been removed from all their computers.  Our job now is simply to check that nothing small had inadvertently been left behind.’

‘Come on then let’s get out of here before we’re spotted by the real Security people.’

Cursing and joking the two left the room, slamming the door behind them.

‘So much money!’ a disappearing voice said. Distance muffled the sound, but acute ears of listening bears heard the sarcastic words Three consecutive numbers can unlock a massive fraud. Ridiculous.’

In the darkness and silence Stanley heard Clive speak but could not see his face. ‘We’ve got to somehow let the company people know their money has been stolen.’

‘How? What could we possibly do?’

What indeed can two small teddy bears do? 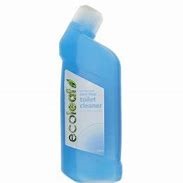 They find a bottle of toilet blue

Stanley was jolted awake when Clive later spoke again. ‘I’ve got it! I think I know what we can do.   Together, we’ll leave a message.   It may take them time to unravel, but it will give a clue to the missing money. We’ll need some liquid substance.  Do you remember where there is a bathroom or toilet?’

Stanley thought for a few minutes then replied. ‘At the end of the corridor there’s a small bathroom and toilet near the cupboard where the cleaner stores her brooms.   Perhaps we’ll find something there.’

Two small bears with difficulty slid down the wall and dropped to the floor.   They charged across the room and rattled and shook the door until the mechanism that locked the door only from the outside ‘popped’.

Joyfully, they skipped down the corridor. Stanley groaned as the door closed behind them.   His bowler hat was squashed but at least the lock did not activate.

How they dragged the bottle and poured the contents, nor any details of their struggle to get back on the shelf was ever explained.

Mavis Coleridge returned to do the final cleaning on May 6th.  She opened the boardroom door and gasped.  Her face drained of colour.

Across the carpeted floor was scrawled……

The writing was shaky.  She carefully wrote the message in her notebook before the spooky message disappeared into the pile of the carpet.   It appeared to have been written with toilet BLUE.   An empty container lay in the corner.

Mavis looked at the bears.   ‘How I wish you guys could talk.’

She thought her eyes were playing tricks on her.  For a moment she thought she saw Stanley raise his umbrella and bow.   His bowler hat was strangely squashed flat.

She pushed the Security Alarm button and before long a police team, who called in experts on internet fraud were pouring over this rapidly disappearing cryptic message on the carpet.

On the morning of 31st May, the media world spread the amazing story.

Clive and Stanley were long gone. Mavis took them back to the factory shipping depot.   They had been borrowed by a client as a gift to the firm. They had not been returned.

Mavis hugged them tightly and placed them again with the Bear Collection on the Assembly Table. 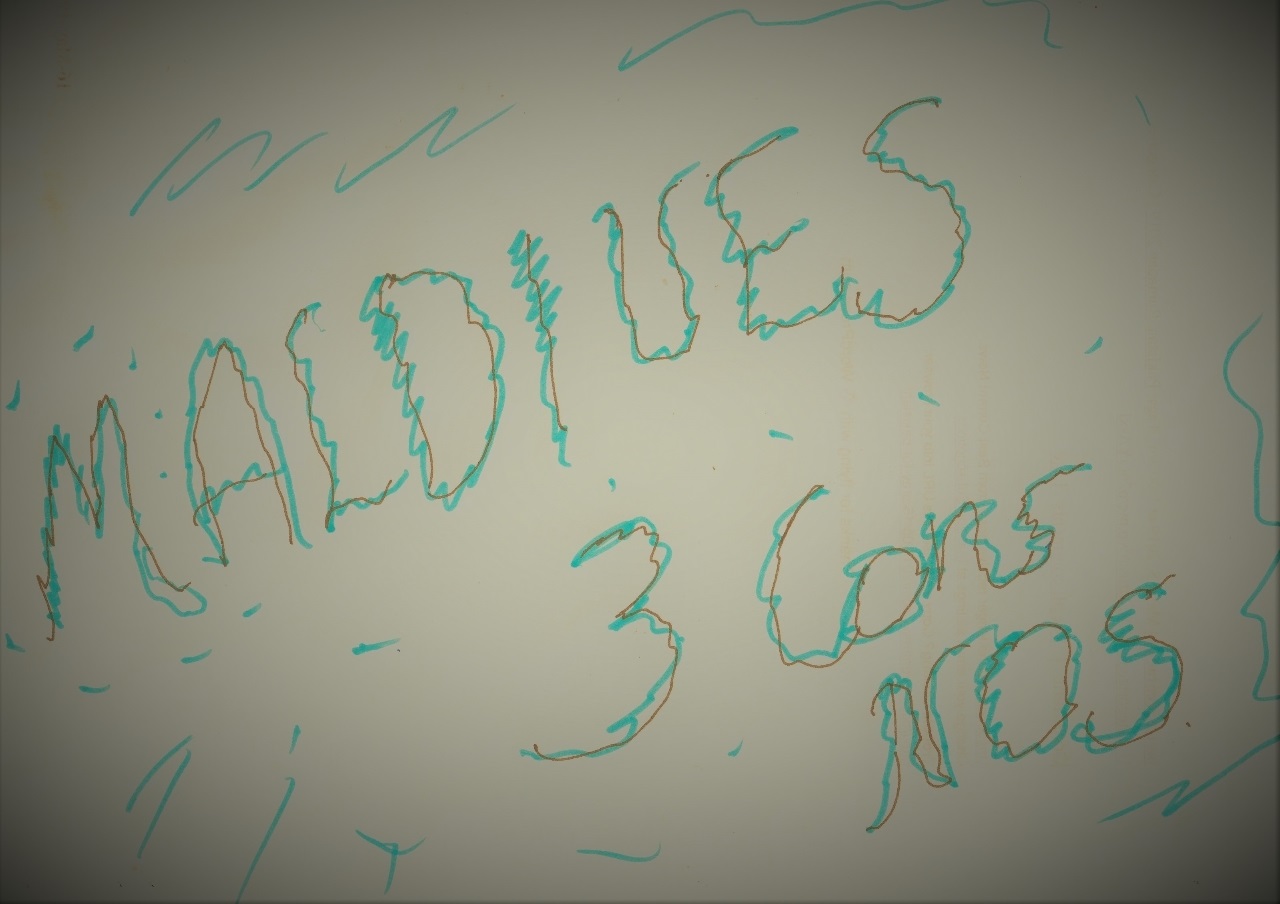 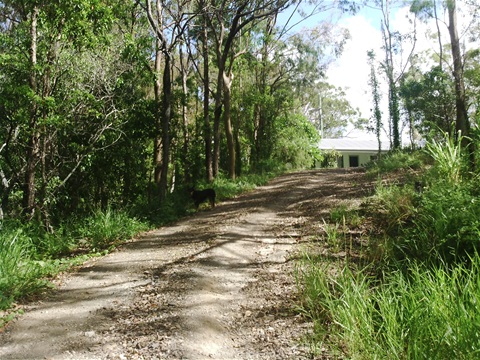 The House on the Hill where ALL the Bear Collection live (40 of the original).

In the house on the hill Old Ted told this story to all the assembled family.   ‘Clive and Stanley are happy to be here and preferred me to tell their story.   They prefer to be hidden and peaceful.

The old man bear nodded towards the row of shelves.  An umbrella waved and a notebook fluttered. In the darkness many bear faces smiled.

We are certainly containers for many secrets.'

Good Night to EVERYONE! 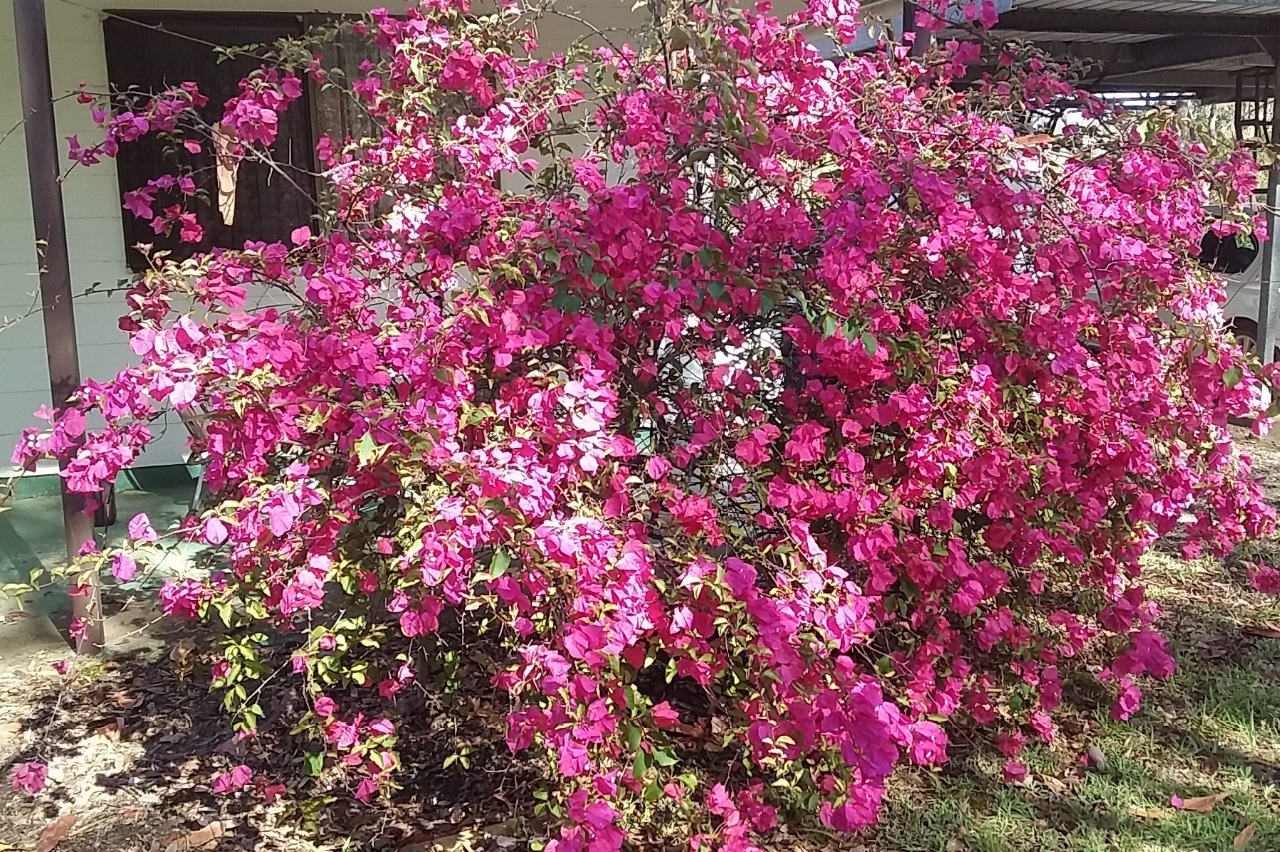 THE FAMILY SLEEPS. PEACE ONCE MORE IN EVERY HEART AND LIFE.