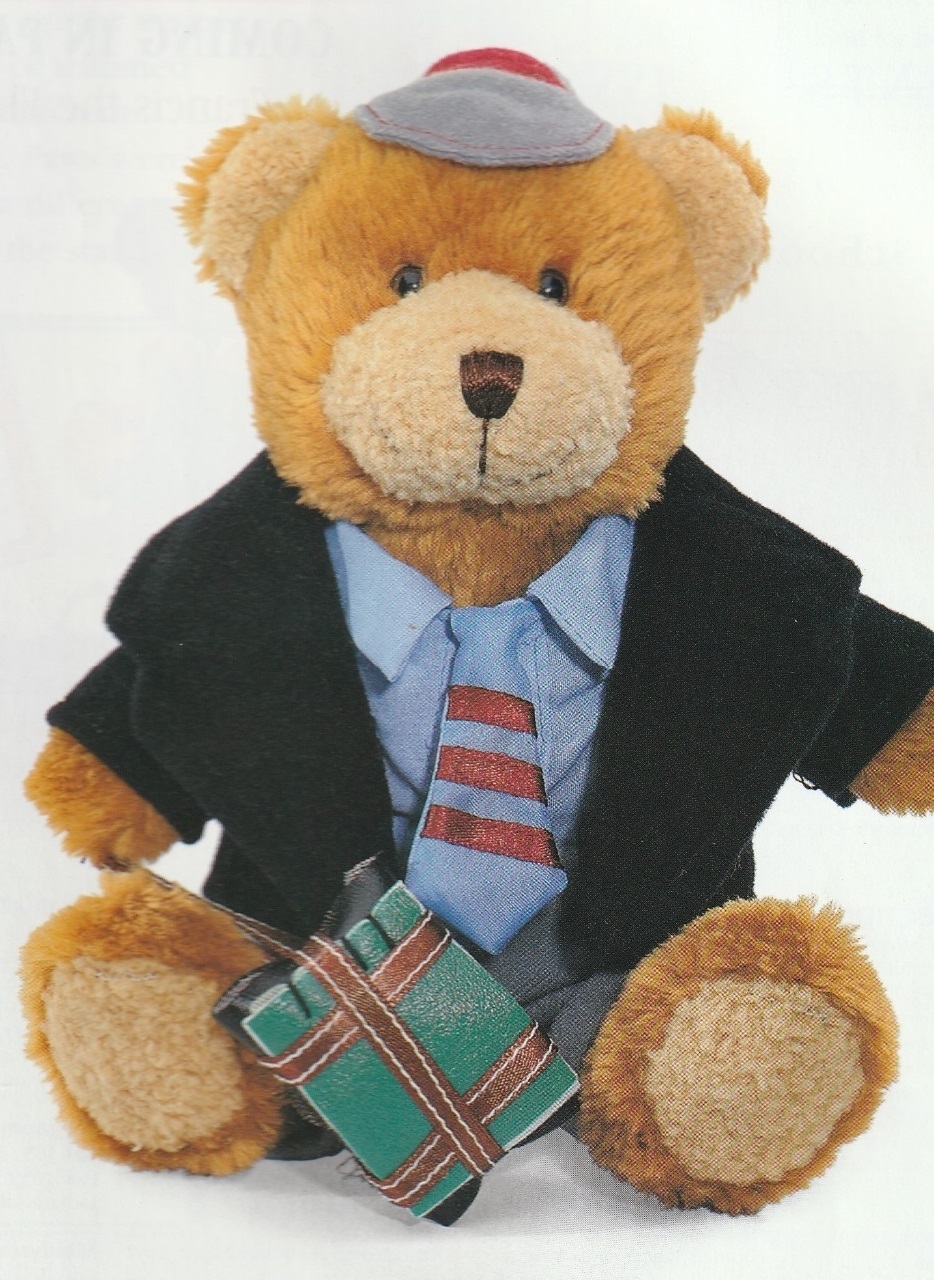 Sam will have an unplanned and unexpected adventure

Sam the schoolboy bear finds himself in an unusual situation.

The summer holidays brought unexpected, but welcome visitors to the House on the Hill.

A party of school children came to walk around the rough bush tracks on an excursion.   They were looking for sightings of koalas, kangaroos, native flowers and fauna.   With notebooks and pencils, these children happily made notes or drew pictures. Twenty children, ranging in age from 5 to 15, returned to the house in the late-morning. It was the planned break for sandwiches, drinks and cake.

The Mother proudly showed them the Bear Collection and named them one by one.   No one noticed that five-year-old Timmy Walker’s hand darted out and grabbed Sam the Schoolboy from the second shelf.

He dropped the small bear into his open backpack and fastened the top flap.

Sam was so surprised he didn’t even cry out.   None of the bears saw anything unusual and the animals were enjoying time with a small group of lively playmates out in the sunshine.

Sam, alone in the darkness, wondered where he would be taken.

He was jostled and bumped.  The movements he felt were like travelling in a moving vehicle.

I’m certainly going far away.  His thoughts raced but he was more excited than he was frightened.   Settling, he must have slept for some time.

He was jolted awake when the backpack hit a hard floor.

‘Timmy, please don’t throw your things around.   Put them away carefully. Then, come for afternoon tea and tell me about your day.’

Sam was again shaken up and down and felt the sensation of falling.  This time it was gentle and when he landed the bag had a more solid resting place, like a wall or the back of a cupboard. He rearranged his clothes and clutched his notebook.

I wonder what’s next?  He could only hear whispers of what was happening in this unknown human environment so decided to wait patiently and remain very still.

It was late and very dark when Timmy came and carefully took Sam from his backpack.   ‘Hi! Little bear.’ He kissed the soft bear face.  ‘I’m taking you to bed with me and tomorrow we will go to school together. Won’t Miss Phillips be surprised when she sees you at ‘show and tell?’

Sam enjoyed the night next to Timmy.  It was what teddy bears had found satisfying for generations. It was the nurturing and comforting role for most.   He knew he had been made for a ‘different’ life, but this night was very special.

Timmy wanted something special for 'show and tell'.

The jolting journey to school on the school bus was another adventure.    It was a bouncing experience where, with pencils, pencil-case, a rubber, a ruler, Timmy’s lunch box, and a few books all competed for space in the back-pack, now school bag.

Sam heard the voice of Miss Phillips.  (He remembered it from her visit to the House on the Hill).  ‘Time now, for Show and Tell’ she said.   ‘Today we will have Marjorie and Timmy to share.’

Timmy fidgeted as Marjorie showed her pressed flowers and spoke about going to a land place where they had a cat, a dog and you could walk a lot and see kangaroos. She spoke confidently and well.

Timmy marched to his backpack at the back of the room and returned to face the class, swinging Sam by one foot.  He patted his clothes down and then gently placed the little bear on the front desk.    ‘This is my show and tell’, he proudly announced. ‘This is Sam the Schoolboy Teddy Bear.’

Miss Phillips sat down.   Her face was drained of colour. She looked shocked and anxious.

Timmy finished his story of where Sam lived and the other bears in the cupboard, and then,  let the teddy be passed from child to child across the desks.

Sam enjoyed meeting with the children very much.  Some small hands pulled at his clothes and were a little rough as they examined his person, but most of the group only wanted to give him a hug.   He longed to do a little dance or say ‘Good Morning’ but rules of Magic Bear Behaviour when in public, were silently obeyed.

Timmy returned Sam to Miss Phillip’s desk,  smiled at his classmates and sat down.

Miss Phillips shakily stood up.   ‘Timmy where did you get Sam from?’

‘He was on a really low shelf in that house you took us to.’

‘Timmy you know what stealing is don’t you?’

‘Timmy did you ask permission to take him?’

‘No, miss.   I collected him like the plants and leaves and put him in my bag for ‘show and tell’. I’ll ask me dad to take me to put him back at the weekend.’

Karen Phillips could see the child’s absolute innocent intentions and hoped other adults would not judge the small boy harshly.

‘Yes, Timmy’ she said seriously.   ‘That’s a good idea. I’ll have a word with Mum when she comes to collect you after school.’

Sam spent the rest of that memorable day on Miss. Phillip’s desk.  He watched with interest all the strange behaviours of these young humans.   They obviously enjoyed learning and being ‘at school’.    He intended to ask Old Ted why his clothes were not the same as these small children.  He knew and was pleased everyone still identified him as a ‘schoolboy’. 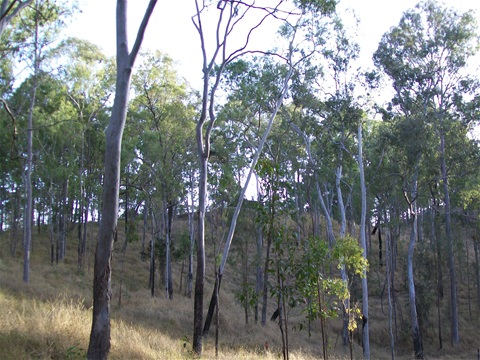 House on the Hill on a dry Summer's Day.

After school, Sam travelled home on the back seat of a small green car. Timmy held and cuddled him against his chest. Soft tears fell on Sam’s ears as a sorrowful little boy sobbed.

‘I didn’t mean to do anything wrong. I haven’t hurt him.’

‘I know, darling.  I know you were collecting for ‘show and tell’.   His mother spoke from her driving position at the front.

‘You took something which is part of Mrs. Daniel’s special collection.   We will say ‘sorry’ put Sam back and hope she is not angry.’

Sam snuggled into the little boy’s chest and hoped he was not frightened when a tiny bear paw patted his arm. Timmy noticed the fluttering action and thought it was wind from the partly open window.

The child and bear slept as the car travelled the 100 kilometres to the rural Home on the Hill.

The Mother, Sam knew, greeted them at the door.   She hugged Timmy and his mother.  ‘Please don’t worry about anything.    It’s all ok.’ ‘Welcome, Home, Sam’ she said to Sam. ‘Timmy could you please put Sam back on the shelf where you found him.   Then, come and have afternoon tea and rest awhile before you travel home.’

Timmy carefully returned Sam to his place on the shelf and sat down happily with the two mothers.

Out of their sight and sound the bear shelf came alive. Bears shuffled to give Sam enough space to settle. Pedro the Pirate exclaimed, ‘Oh young un I knew you were gone when I woke up. I tried to let everyone know but it was as if you had vanished.   No one knew what to do.’

‘We covered your space Colin the Captain added ‘but we were helpless and wondered if we would ever see you again.’

Bear voices called from shelf to shelf.  ‘Welcome home, young Sam!’ resonated around the room. The humans at the table did not hear but Missie, outside, could not contain her excitement.    She began barking hysterically.

‘Missie QUIET! That’s too much noise.’ Mother’s voice was sharp and authoritative.

The welcome home would have been complete, but Sam was happy when Jimmy came for a final hug.   The two shared a special moment.

Then, Mother did something the bears had not seen before.

She put her arms around Timmy and Timmy’s mother and said what Old Ted explained to them all later ‘a prayer’. A talk to God.

Father.   Please look after Timmy and Karen.  Grant them Peace and safely guide them to their home. In Jesus’ Name

Peace  also filled the House on the Hill.

The Magic Bears in their realm of ‘imagination’ and the humans and the animals who lived reality of life, were somehow joined and comforted.

Sam knew, one thing for certain.

He was happy to be home. 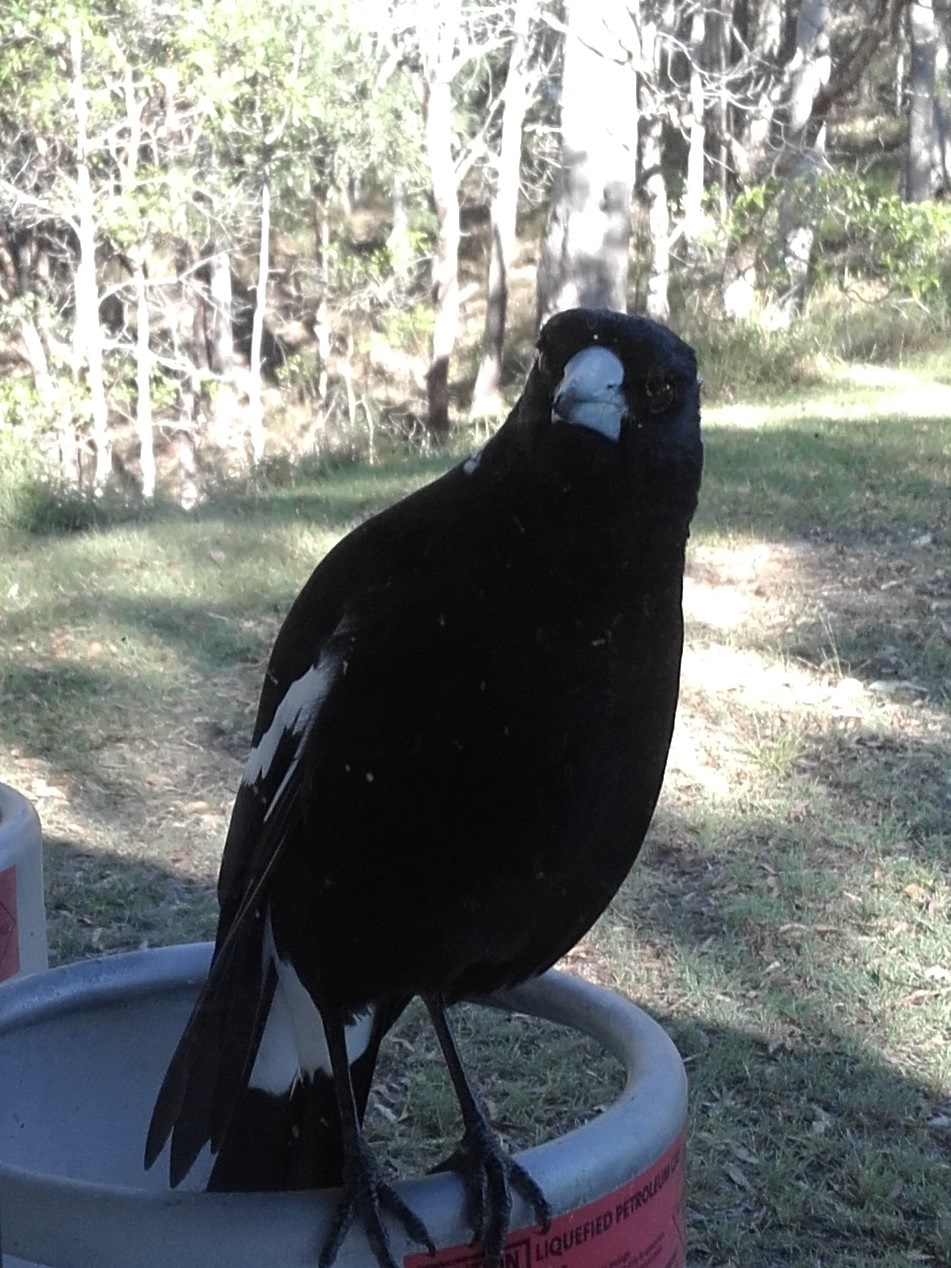 The visitor Max the Magpie, thinks he is more important than anyone...humans, bears or animals who live on the ground in the House on the Hill. He flies in and flies out. Makes his presence known when he arrives. No earth bound life for him!