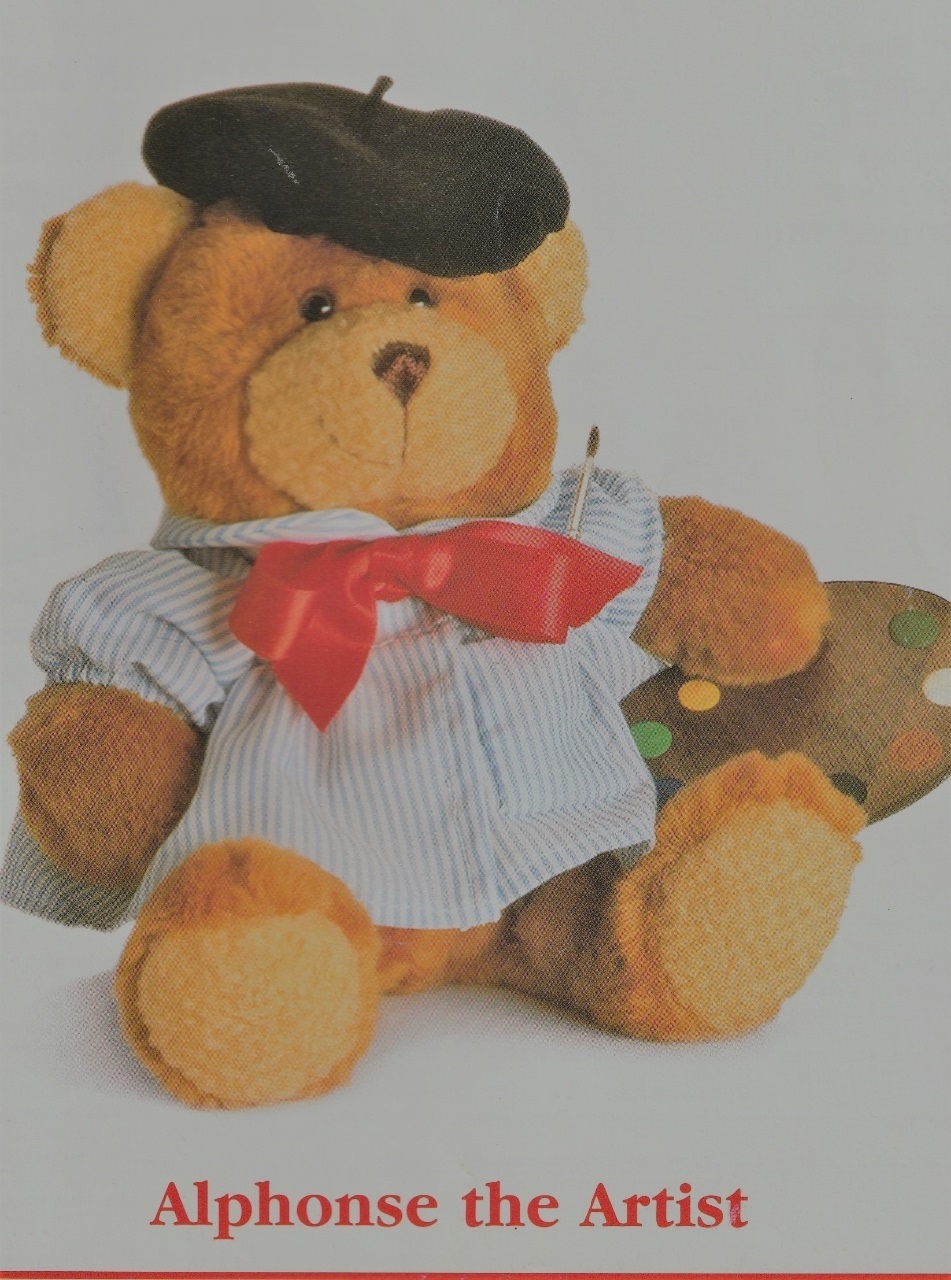 Alphonse in trouble? Did he paint the mysterious picture? 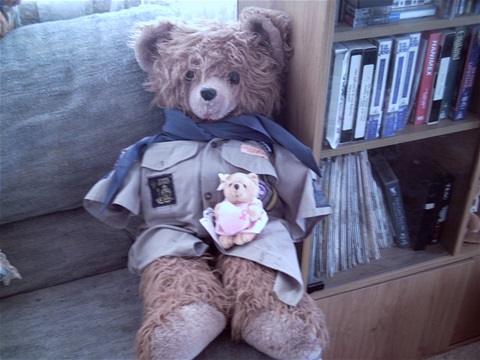 ‘Joseph! Joseph! What is that paper? It’s blown from somewhere.’

He shook off sleep and focussed his dark brown eyes.

A piece of white paper gently fluttered past before spiralling and drifting to the ground and sliding beneath a lounge-chair.

His eyes registered that there was a brightly coloured patterned drawing on the page.

He grunted and Old Ted woke up.

The old grey bear listened carefully.   He wasn’t sure what had disturbed him. He could see that Joseph and Sue were also awake but suddenly they all heard a piercing Magic Bear voice coming from the shelf across the room.

‘Please!’  the voice called. ‘I’d like to have that bit of paper back.   I found it and it’s mine now. I left it to dry on the window ledge.  The wind must have taken it away.’

‘What’s your name, young man?’   Ted did not recognise the voice but was sure he was not one of the ‘hidden’ few like Santa Bear and Francis the Florist who had special jobs to carry out when required for seasonal purposes.

This voice was unfamiliar to the listeners.

‘I’m Alphonse, the Artist’ the lilting high-pitched voice proclaimed.   ‘Please can I come and get my piece of paper?’

‘No!’ Old Ted replied with authority ‘It’s too dangerous now.   The folks are already stirring.   A new day will soon be dawning’.  Ted’s deep voice sounded angry.  ‘Also when you came here you gave me a promise that you would only paint pictures ‘outside’.   You would ask permission so you would be protected while you worked.   Have you disobeyed this rule?   Have you painted this picture?’

‘No’.  Alphonse answered. ‘I did not paint or draw the picture.

I would like to get it back. I’m very attached to it.’  The young bear’s voice had the lilting inflection of a foreign tongue. ‘I’m sorry, I didn’t ‘paint the picture’ but I did the wrong thing by not asking permission to come out and be in public view.    Please can I tell everyone my story as some of the others have already done?’

Old Ted nodded.   ‘Two days then. The human children will be back at school, and the adults won’t want to stay up late either.  I’ll tell the others and will let you know the safest time for you to socialise.’

‘What about the picture?’ Alphonse asked.  His voice was sad almost as if he was crying.

‘I’ll watch it’ Sue called shyly. ‘If it is moved, I’ll watch where it’s taken.’

The following day the paper was moved.

Mother was doing a quick clean-up before going out for the day.   She saw the paper under the chair and picked it up with other paper scraps and put them in the recycling bin.

When the sound of the mother’s car had faded into the distance,   Sue called as loudly as she could.

‘Missie.   Missie Please can you help?’

With border-collie enthusiasm she burst through the back door and hurtled into the lounge.   ‘Yes!   Yes! Here I am’ she barked.

She looked up at the small pink bear and gently licked her furry paw.

Then, Missie sat, still and expectant, waiting for instructions.

As soon as the problem was explained she charged across the room and circled the recycling bin an innumerable number of times. (It seemed to Old Ted who was always alert for the return of adults) that the dog circled the bin for hundreds and hundreds of times.   His head was swimming when the panting dog finally nudged aside the bin lid and peered inside.

Missie pulled out a page with a coloured picture. Then, triumphantly, she danced around and round the room with this sheet clenched in her teeth, secured by one corner.

All eyes watched the dog. Many wondered if she would ever stop  dancing and would the delicate piece of paper survive?

Finally, she dropped it on Sue’s lap.

‘Well done, Missie!’.   The room resonated with a chorus of cheers.

Missie proudly trotted outside.   She returned to her private place, to snooze in the sun.

Joseph immediately grabbed the page and placed it behind a cushion. He then reclined his body against the cushion.  ‘It won’t move now’ he growled to anyone still listening.

The page was indeed anchored securely.  Old Ted had to prise it out when he collected it two nights later.    He placed it in the centre of the mat.    It was now Monday Night and all bears were awake and the animals were happy onlookers from the sidelines.

‘Ok young Alphonse.   It’s now time for you to come and tell your tale.    How did you get this picture? ‘ 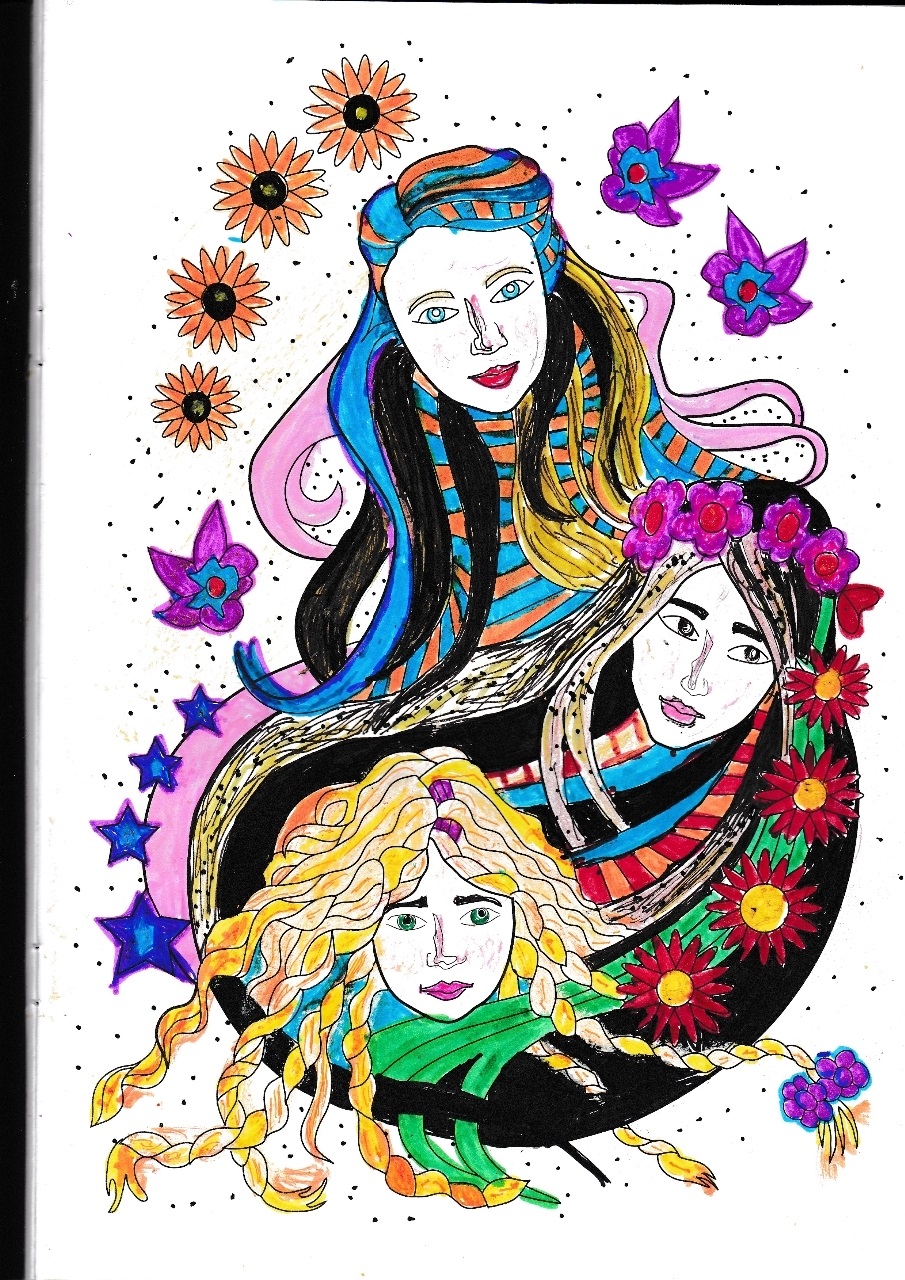 Mysterious picture. What does it mean? Who painted it?

The picture on the floor reflected lights from the moon and stars outside but stare as they might, no one was quite certain what the strange human faces represented.

Clutching paint brush and palette, the small tan bear with the caramel-coloured foot pads, dropped down from the highest cabinet shelf.

He stood and looked at the image on the floor.

‘Good evening everyone!’   Alphonse bowed elegantly and then turned to face Old Ted.

‘Ted, I’m sorry I did not tell you the whole truth when I said I did not draw of paint this picture.   I did however attempt to ‘colour it in’.       It was an amazing experience and I think you should hear the full story.   I’m rather proud of this picture but really can’t explain it.

The children who came last week taught me so much and one little boy they called ‘Bobby’ became my friend.’

He inclined his head shyly and continued speaking. ‘I’ll tell it from the beginning.’ 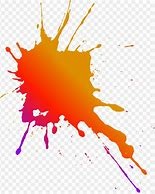 You may remember that unusually warm afternoon when all the visitors came. and the adults went to sit around the pool.  It was too cold for swimming but peaceful sitting in the warmth.

The children wanted to do ‘craft’.  Two tables were set up in the backyard.  I noticed through the window that one younger child was placed alone at a smaller table.   He had his own pictures, a small pot of paint a brush and lots of pencils.

I enjoyed watching them at their activities. The older children were so concentrated on their tasks that they did not see when Bobby knocked over his paint.

Paint was dripping everywhere.  Bobby began to cry.   I desperately wanted to help him!

I climbed upon the cupboard’s highest edge and hurled myself towards the partly open back window.

Not a particularly good idea!

I flew through the window alright but landed outside on the lawn in a tangled, jumbled mess.   My brush and palette of paints were somewhere under my left shoulder.   I could not stand up.   One of my legs was twisted in a bush.

Bobby was apparently the only one who saw me hurtle past.   He came over and spoke, ’Oh poor little bear.  Did you fall out of the window?  I’ll  help you.’

Gently, he turned me over, rearranged my clothing, then he carried me with him back to his table.

The small overturned paint pot was still dripping blotches onto the paper tablecloth.

Then, I saw a picture of a fire-engine and had an idea.

I handed Bobby the picture and said, ’Take my paint brush and I’ll help you.’

I’m not sure if he heard me but he looked at me very intently and replied. ‘Thank you, little bear.’

Together with my brush and his smaller one we transferred layers of spilt paint on to the image of the truck.   Finally, a blotchy but very clear fire-engine appeared.   It looked very stunning with its layer, upon layer, of rich red paint splotches.

Bobby laughed, then clapped his hands.

‘It’s great! Here you are little bear this one’s for you.’

He shuffled through the sheets on the table and placed in front of me a strange picture of two girls.

‘Use pencils’ his serious four-year-old voice proclaimed.  ‘Use pencils and colour it in.   I’ll help you.’

I had no idea how to colour in but Bobby pointed to lines and said ‘Don’t colour outside these.’

I was having a great time.   The picture looked a bit strange but between us we tried our best.

It was then the strange things began to happen.

An older boy, I had not seen before, came to the table and waved his hand over the drawing. ‘Good work, Bobby!’ he said.

He stayed and coloured in a small section.  He did not acknowledge me at all but smiled and waved when he left.   His contribution looked shiny on the page.

Only a few minutes after his departure a girl came.   She said ‘Hello, little Alphonse.  Hello, Bobby.   I have come to help.’

Before long the picture was complete.

This girl then said. ‘Bobby show everyone your wonderful fire-engine.’

She handed me the picture of the girls with the now flowing hair.   This one, is yours Alsphonse. ‘   She tucked it under my arm. Please do not move from here.   Don’t speak to anyone.  I’ll take you back inside when all the people have gone.’

Bobby then turned and spoke directly to me in a soft almost whispered voice.  ‘Alphonse the Artist Bear, Thank you for your kindness.’

There was a lot of packing up and laughter and many exclamations.  ‘Come and see Bobby’s painted fire-engine'.

10year-old Timothy Jacobs said. ‘At your age I could not have done that.’

I stood patiently and much later w'hen it was beginning to get dark, the blond girl returned.

Gently, she carried me back to the cupboard.

She took the paper from under my arm. ‘I will sponge down the back of this picture.   It has streaks of read paint along the edges.’

She did this, somewhere in the bathroom, I think.

‘Now I’ll put it on the window ledge here to dry.’

Alphone continued.  'It was from there the page blew down and Sue saw it falling.

‘Great story, Alphonse’. Ted said.   ‘We won’t question the mysterious but accept and be grateful.’

‘Still young fella’  Uncle Joseph growled. ‘Please, ask permission before you go anywhere else.  It’s hard for us to keep track of everyone.

Her soft voice proclaimed.  ‘I believe kindness reaps its own rewards.’

‘Maybe that's what the picture represents.

With muffled affirmations, the family of bears, and the animals settled back into their right places and slept.