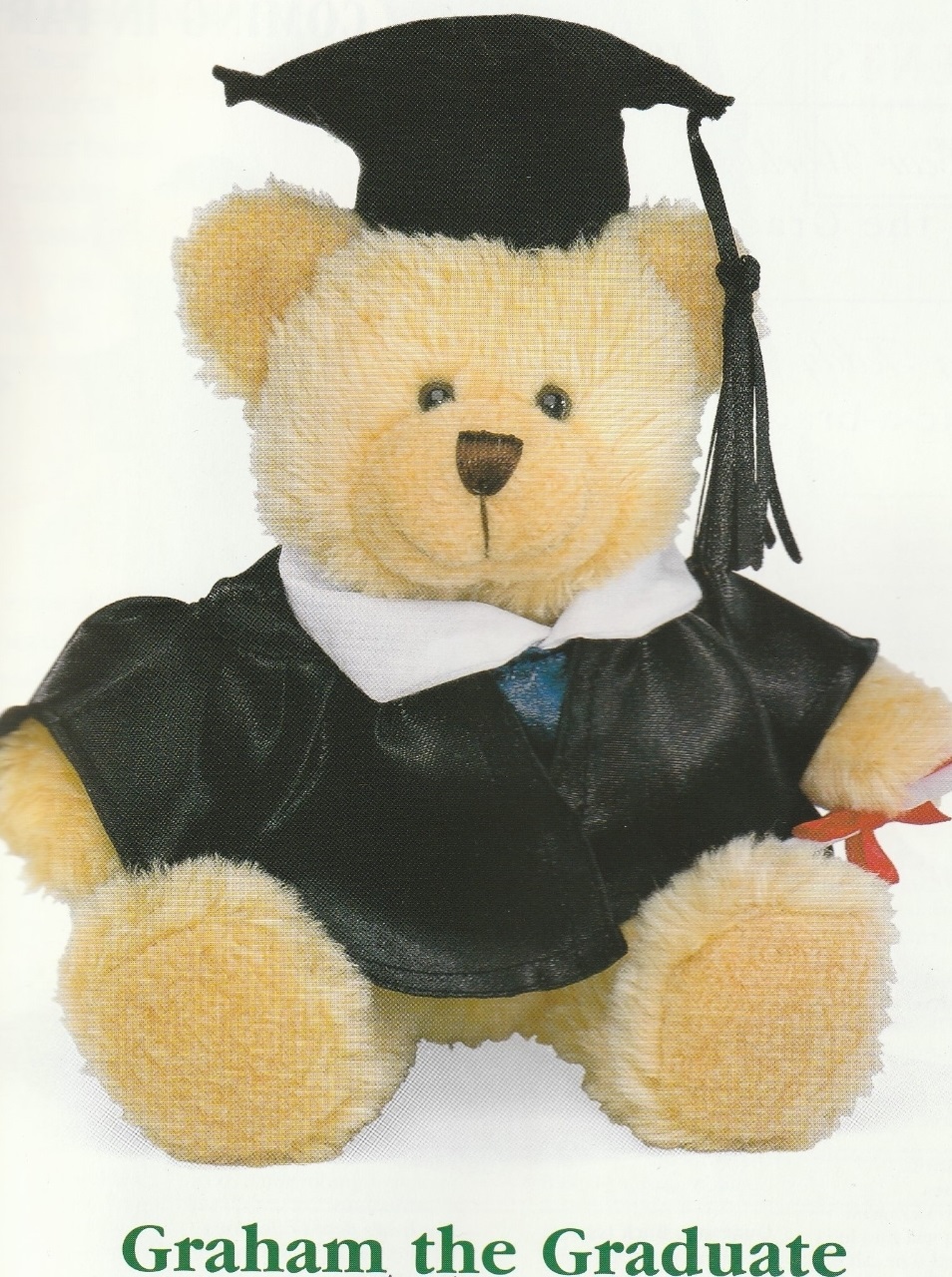 A large human hand plucked Graham from the shelf.

‘This is the one’ a deep man’s voice excitedly shouted. ‘Can I please take him with me now?’

Ben, who managed the Assorted Crafts Store in the main street of the small tourist town, looked up from behind his cluttered counter.

The sight of this large, dark-skinned man, holding with obvious joy a small, fluffy, light-coloured teddy bear, dressed in the cap and gown of a graduating student, brought a smile to his face.

‘Thank you.’    He bowed politely, paid and hurriedly exited the store.  He clutched the box tightly against his chest His huge dark eyes were awash with tears.

He walked further along the street then looked towards the sunlight dancing on the distant hills.

‘Thank You Lord for leading me to this symbol of Hope and Your Grace.  In You ALONE I now put my Trust for the life of this young boy.     A-men. ‘

Pastor Daniel Jacobs walked along the sundeck to where ten-year-old Mikey Leeds, wrapped in blankets reclined on a chair. (The table beside him was neatly piled with easy-to-reach needs -tissues, water, tablets and assorted light snack foods).

The boy’s expression did not change from sadness as Daniel entered, but their eyes connected, and Mikey knew the Pastors were full of pleasure and understanding.

‘I have brought you a friend,’ the man whispered. He removed me from the box and placed me beside the water-bottle on the table.

I bowed politely.    I realized only the boy could see me.

‘Why is he dressed like that?’ the child asked.

He is a symbol of a graduating student from a College or University.   He is the Hope for future goal attainments for you.

‘Nothing is impossible for God’ Pastor Dan replied.  ‘I have promised your parents not to upset you by talking about anything they regard as ‘false’ Hope.

However, you are my friend and I promise you Mikey, I will never stop praying for God’s Presence in your life.’

Mikey had been battling an acute respiratory disease for four years when I arrived at his home.

Graduate Bear Graham stood now in the middle of the carpet in the lounge room of the House on the Hill. (The small rural property in Eastern Australia.)   It had become a home for a magic ‘Bear Collection’ These were Teddy Bears of different colours and costumes and they all had name tags.

The larger Bears in the room... Old Ted, a gnarled very old grey bear,  and Uncle Joseph who cradled a pink care-bear named Sue, were the original residents and not a part of these slightly ‘exotic’ labelled new arrivals.

I was left on the table beside the water bottle.   I felt neglected.

Mikey would stare at me.   He always looked extremely sad.

Then, one night, he gently picked me up and carried me with him to his bedroom.

‘Stay with me’ he whispered. ‘I’ll look after you.’

Each day Mikey’s family (a mother, father and two sisters) assisted him in the late afternoon to the shower and together they shared an evening meal in a large dining room.   I was now allowed to stand on the cupboard top on my own special stand.

After the evening meal the boy was connected to a ventilator and he now always took me.  I stood beside him during the night. I was aware of how he struggled to breathe during these long night-time hours.

Graham paused in his story.

Graham looked around.   He could see eyes glittering in the darkness and knew he had the full attention of the small bears on shelves and in the cupboard.

Old Ted in the armchair was not snoring.   He presumed the grey teddy also listened.

‘I lived eight years with that family.   There were trips to hospital on many occasions.  I was placed beside his bed on a little stand.  His life was not easy, but Mikey’s spirit was cheerful and he laughed a lot.  I was aware on many occasions that although he was alone, there was an unseen Presence that constantly was with him.

One night I saw an angel.

He glowed.  (The whole room lit up)

He told me he had been sent by God to also watch over Mikey as he slept.   Many people were praying.

Mikey continued his studies during multiple hospital procedures.   While in hospital nurses and other helpers tried to assist him as they were able.

During the golden days of recovery between hospital stays he read and exercised.  He played music and had student friends over for barbecues.  They swam together in the backyard pool.   There was a lot of great living in the midst of what we all knew was a serious health condition.

I many times saw his Mum, Dad and sisters hugging and crying when Mikey was not present.

Graduation Day was unforgettable. Mikey graduated from the College he had attended ‘on line’ for four years, with ten others.

A special ceremony was held in the City Hall.   One young woman walked with great difficulty, using a walking frame.

From my special position on the podium with the Graduation Certificates, I saw Mikey assist her up the four steps to the platform.

I remember the music, the joy and beauty of that Graduation Ceremony and value now the costume I wear that before that day seemed very strange.

Mikey hugged me on the day he left to begin his research position at a hospital.   ‘I can’t take you’ he said sadly. ‘My parents believe you are to be cared for in a special home with friends who will value you.

You have been like a Super Hero to me.   Looking at you always inspired me to ‘Keep Going!’.   My life may not be long in years, but I will never forget my little Graduation Teddy that my friend left by my bed when I was a young child.

He hugged me again, kissed me on my right paw and left.

The family carefully packed me in a tissue lined box.

I heard the Mother say sadly.  ‘I believe this little Bear belongs in a Collection.   I’ll take him to the Toy Factory in the City tomorrow.’

‘I wonder if it’s the same place where I was taken' ’ Clint the Cowboy yelled from one of the shelves.   ‘I sat waiting in that place for ages till I came here.

Other voices chimed in with their memories of factory waiting until Joseph growled and muttered.

‘Did you stay there long, Son?  Old Ted asked politely.

‘Time seemed to stand still for me when I got there.  It was if I returned suddenly to being a little teddy in a BIG PLACE It was a shock after being for a long time constantly in view.  I am incredibly happy Mikey achieved his ‘impossible’ goal.

Please also know that while I’m proud to be Graham the Graduate Bear my happiness is complete now.  I’m one of the Secret Seven, living quietly at the back of the top shelves.   I know my home is here as one of the bears in ‘the House on the Hill’.

The bears cheered.   Missy barked once.  Sophie scratched her cat pole excitedly and only a small quantity of water splashed out as the goldfish responded with leaping appreciation for the story and the excitement of the others.