The Adventures of the small terrier and her teddy bear companions begin.

‘Do not touch the small bears!’.    Char-lee the small Maltese terrier could still hear the Mother’s voice as she wandered past the new shelves where the little teddies were now positioned in neat rows.   “I know you are a good girl and we trust you not to play with them.  They are not toys like you have in your bed.’

She realized on curious investigation,  all the bears on the lowest shelf were level with her face.

She remembered Santa Bear.  She had seen him standing on a pedistal beside a Christmas Tree the family had put coloured lights and gifts around. This was during a celebration they had shared called Christmas.     Santa Bear had been a part of some sort of ‘Birthday’ celebration.

Charlee had been sternly told not to touch anything.

Her most graphic memory was of one morning-.( An adult said it was Christmas Day,)    being cuddled and loved then given a parcel from under that tree and told it was for her.

She was allowed to rip off the paper and found special treats and a blue  ball which made noises when she touched it.  It frightened her!    She began to shake.  She remembered hearing a voice above her say ‘It’s only a ball. Dog. You’re the boss!’

She was certain it was the small Santa Bear who had spoken to her.

She hit the blue ball and sent it flying down the corridor. It mumbled and made squeaking sounds but connected with the end wall quite hard and was silenced.   It never made noises again.

She looked up to thank Santa Bear, but he appeared to be busy untangling tinsel caught on a small tree angel’s wings.

NOW, it was probably a couple of weeks later. The house was no longer decorated and the tree in the corner but a memory.

On a hot afternoon when the house was still, the little dog was alone. Curiosity propelled her to check out the resident teddies on the lowest shelf.

She was surprised to see Santa Bear especially when he bowed politely and winked at her.     The pom pom on his hat bobbed up and down.     Charlee reached out and patted his arm.  He patted hers,

She was alarmed.  She did not know the little bears were magic.   She backed away.

He desired to comfort her so jumped off the shelf  and stood beside her.     He forgot the Rule of Bear safety NEVER leave the shelves  in daylight.

They were standing in companionable silence when a deep angry growly voice shouted from the depths of the armchair, “Go back where you belong young red suited teddy and you little dog  ‘GO AWAY!’.

Uncle Joseph was furious.  He  had been woken up!

Char-lee fled to her safest storm shelter bed and Santa hastily swung his toy bag in front of him and climbed back to his alphabetical position between Sam the Schoolboy and Scott the Skier.

Scott was caring.  ‘Not your fault young un. Both you and the little dog were being kind,   I hope you can meet safely and properly one day.' 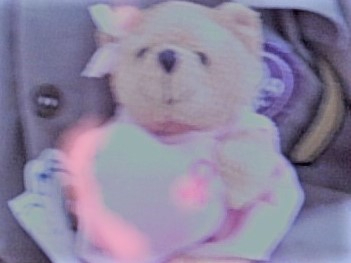 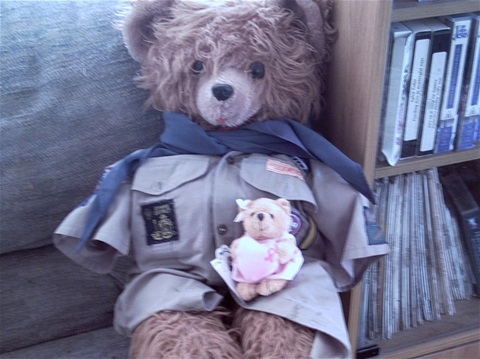 Sue loves her position on Uncle Joseph's lap but worries when he seems too growly. She loves Joseph very much and he protects and guards her from harm.

Old Ted speaks with  Uncle Joseph and together with Sue's suggestions plan an official night-time meeting between Santa and the little dog.         ***

A few nights later when moonlight was still shining light through the side lounge room window, Char-lee, who was sleeping on her back in her usual doggy bed  in the corridor, woke up when she felt something soft shaking her back foot.

An urgent voice said, ‘Please don’t bark! I’m Sue and I am asking you to please follow me.’

Charlee’s black eyes opened wider.   She was shocked but too scared to bark even if she wanted to.   She had seen Sue before but to find her now in her bed was exciting but very perplexing.

She rolled over. Stood up.   Shook herself and then followed the small pink Teddy into the Lounge.

Old Ted spoke from his position in the large chair.

‘Welcome, little dog.  If you can learn the rules of Magic Bear discipline, we can have friendship with you.     You will see some unexpected things when you get to know us, but do not bark. Do not disturb the family and we would be happy if you sometimes joined us.   Other dogs and even a cat and goldfish many years ago became our friends.

Char-lee was mesmerised by this very old talking teddy and nodded.

Sue from her position on Uncle Joseph’s lap spoke.

'Santa please come out and say hello to our new doggie friend.'

Santa jumped to the floor and waddled towards char-lee cheerfully swinging the Christmas gifts he had attached to his paw.’

‘Ho! Ho! Ho! I’m Santa and you won’t see much of me as I keep very well hidden and am only really allowed out at Christmas Time.   One day if you see my story, you will know I was very unhappy until an angel on the top of the Christmas Tree told me the real story of the baby, His birth and why He came to earth.      I now am one of the happiest residents in our community.  I accept who I am as a little teddy made with love for a purpose.’ 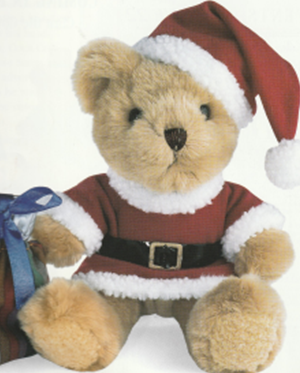 PLEASE INVITE MY FRIENDS TO MEET THE LITTLE DOG>

Char-lee moved towards the small bear and lovingly licked his face.

He was surprised and laughed, not his usual hearty Christmas greeting but a surprisingly rippling indication of mirth like a tinkling bell.

Char-lee unexpectedly rose onto her hind legs and did one of her poodle/terrier jigs.  From the shelves of watching bears came silent bear applause but movement as they moved back and forth.    Clint the cowboy threw his hat in the air and called out ‘yippee!’

Santa bowed politely to the little dog. She sat down and offered him her paw.  He put his free paw into hers and an unexpected doggie woof and the words ‘I like you’ were heard by everyone.

Uncle Joseph’s growly deep voice now called out.  ‘Thank you Santa and Char-lee.  This has been a great greeting time but I think we should all settle down now and let Chat-lee go back to her bed and Santa to climb back to his shelf place.        Good night All!       Thank you and now back to sleep.’

Charlee said “woof’ and moved away immediately but Santa hesitated and looked up at the senior bear in the big chair and said.

‘Please Old Ted would you arrange a meeting so the other bears can meet this little dog.  It would stop her getting into trouble because of her curiosity.     I know my companions on my shelf would like to meet her face to face.’

There were murmurs in reply then once again the house was quiet and still.

‘I can’t believe that happened’  The little white dog’s final thoughts before she too fell asleep, back in her warm familiar doggy bed basket, were excited and wondering. .

A soft gentle breeze carressed the curtains and wafted through the house. Peace was on everything and humans and all other residents slept soundly until morning sunlight announced a new day!